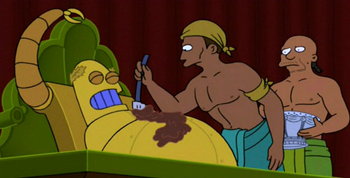 "Surgery? In an opera? How wonderfully decadent! And just as I was beginning to lose interest! Jambi, the chocolate icing! Oooh... oh, my, yes."
"Give yourself over to absolute pleasure."
— Dr. Frank N. Furter, The Rocky Horror Picture Show
Advertisement:

This character is strongly motivated by a desire to be amused and experience various kinds of pleasure. The character doesn't consider even their own long-term needs, much less the (short-term or long-term) needs of others. Personal instant gratification is the goal here. Sometimes Flanderized so that the pursuit of pleasure becomes the character’s only defining trait, doing whatever feels good without any thought of the consequences. "I Did It for the lulz" might just as well be their motto.

Such a childish mentality is often justified by the character actually being a child. If the character is an adult, they might be a sex maniac… lovable or otherwise.

While usually Played for Laughs, this kind of character is sometimes played as a Strawman Political against Ethical Hedonists or people with a Hedonistic Lifestyle. Unlike these real hedonists, a childishly hedonistic character is not prone to consider other people’s happiness, or even their own long-term happiness: instant gratification is gold. If it feels good right now, live it up! Why waste time on thinking? Thinking isn’t fun! Unless you are thinking about how to get what you want as quickly and effortlessly as possible, that is.

It's original to compare this general viewpoint of some ancient hedonists, who believed you should basically do the opposite; true happiness is the opposite of desires, which cause pain. So you shouldn't do anything like this as that won't lead you to real happiness (see Epicureanism, for instance). Or at most, indulge only in moderation, and not when it causes greater pain. You can imagine any of the characters on this page laughing ruthlessly at the idea.

Compare It Amused Me and Protagonist-Centered Morality (for this trope played sympathetically). For Happiness is another related trope (and a relatively Good Counterpart to the trope). This trope is one of the defining traits of a sociopath and is also commonplace with the Straw Nihilist and the Psychopathic Manchild.

Subtrope of the Sin of Lust.

"My lady, you'll find, that with the exception of an honest day's work, there's no challenge I'm not prepared to face."
"The truth is, I like this world. You've got... dog racing, Manchester United, and you've got people. Billions of people walking around like happy meals with legs. It's all right here."

Augus is a hedonist who is only interested in personal satisfaction, including all the food he could eat, alcohol he could drink, women to love and battles to fight. Considering he possesses an affinity to greed mantra, this insatiable hunger for Earthly pleasures only makes him more powerful.

Augus is a hedonist who is only interested in personal satisfaction, including all the food he could eat, alcohol he could drink, women to love and battles to fight. Considering he possesses an affinity to greed mantra, this insatiable hunger for Earthly pleasures only makes him more powerful.