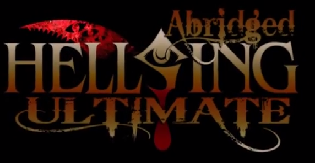 "Dear Chief Replacement: I wanted to send you this friendly little letter to inform you of your imminent demise. If you're curious about the frequency of which I've sent these letters, it is merely to instill as much fear as I can. As if basting a turkey. Which I will then proceed to have sex with. THAT'S RIGHT. I'M GOING TO FUCK THE FEAR TURKEY. Follow me on Twitter @thecrimsonfuckr

The Abridged Series of Hellsing Ultimate, made by Team Four Star. That's about all you need to know.

The Character Page is currently on construction. Please contribute if you will.

[Thirty years in the future...]
Alucard: Uh, by the way, did One Piece wrap up, finally?
Integra: Yeah, but it's got a sequel called Two Piece.
Alucard: [not expecting a positive answer] Is it any good?
Integra: Eh, not sure how I feel about Buffy as the main character.
Feedback