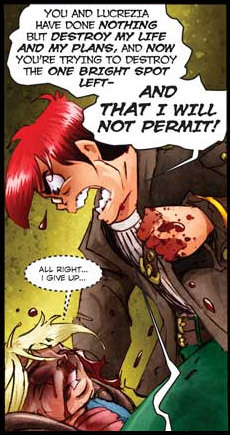 "OH, NONONO NO, YOU DO NOT "GIVE UP!" YOU DIE!"
"After a while, all I'm doing is punching wet chips of bone into the floorboards. So I stop."
— John Hartigan, Sin City
Advertisement:

Bob has been dealt a horrible injustice by Emperor Evulz — perhaps Cool and Unusual Punishment, family murdered, an earlier No-Holds-Barred Beatdown, or maybe Evulz had a fax machine that plain didn't work.

When the time finally comes to deliver justice, Bob pulls out all the stops and attacks Evulz in a rage of melee combat, even though he might have a much more efficient/safe method of attack, and ends up continuing WAY beyond what is necessary. Often accompanied by Bob screaming, either incoherently or about how much he hates Evulz. Sometimes Bob will list Evulz's crimes in "And This Is for..." fashion. He may even try to run him through the aforementioned fax machine.

While causing considerable damage and pain for Emperor Evulz, Bob is often hurt by his own fury after he calms down. Sometimes Bob ends up Pummeling the Corpse, either in a bid to make sure Evulz goes down and STAYS down, due to being too mad to register that Evulz gave up the ghost during this savage beatdown, or due to a need to let it all out.

A Sub-Trope to No-Holds-Barred Beatdown.

I Already Made You a Promise

Instead of executing the cannibals with bullets, Rick and co. beat and slash them to death.

I Already Made You a Promise

Instead of executing the cannibals with bullets, Rick and co. beat and slash them to death.