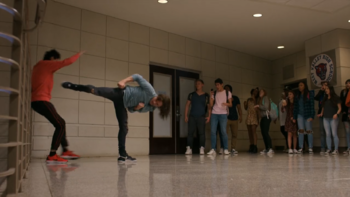 The morning after Moon's party, Daniel discovers — to his horror — that Robby has taken Sam to Johnny's apartment. Meanwhile, Robby begins to reconcile with his father. He is thankful for Johnny's help, and although his father feels the need to tell Daniel that Sam is at his place, Robby is willing to accept the blame to prevent further tension between the two men.

However, Daniel is in no mood to talk when he arrives, and he and Johnny begin their long-awaited "rematch". They exchange several attacks before Sam and Robby interrupt the fight. The teens' pleas fall on deaf ears, and Daniel dismisses Robby as a loser like his old man before furiously leaving with Sam.

At the school, Miguel and Aisha are worried about Tory, who has not been seen or heard from since the party. Daniel arrives with Sam, still disgusted that she turned to Johnny instead of him in her hour of need. Sam pleads for Robby's innocence, but Daniel makes it clear that he has washed his hands of his arch-rival's son. Finally, Johnny arrives with Robby; even as Johnny's attempts to be fatherly to him on his first day of school are awkward, Robby appreciates that he is trying, and encourages his father to make peace with Daniel, believing that the two of them could learn some things from each other.

Before class, Robby and Sam have a chance to talk about the events of the night before. Robby confesses to hiding the truth about Miguel returning the Medal of Honor because he felt insecure. Sam appreciates his honesty, and is about to confess to kissing Miguel when the first bell interrupts them.

Shortly into the morning announcements, Tory seizes control of the intercom to announce her revenge on Sam. The two girls circle each other in the hallway, with Robby and Miguel frantically racing to reach them. Robby gets there first and manages to briefly separate them, only for Miguel to arrive and — believing that Robby is attacking Tory — start his own fight with him.

The tension between Miyagi-Do and Cobra Kai comes to a head, triggering a massive brawl between both sides. With so many students clashing throughout the hallways, the teachers cannot restore order (and the one who at least tries gets curb-stomped for his troubles). The conflict is less a fight than a riot or even a battle, and many arch-rivals and former friends on both sides pair off. Besides Sam/Tory and Miguel/Robby, Chris fights with Mitch, Hawk attacks Demetri, and Bert throws down with Nathaniel. Stingray, hoping to get hired as a security guard, wades into the brawl for the Cobras.

Eventually, the Miyagi-Do fighters turn the tide of the battle. Chris knocks Mitch out by hitting him in the head with a book, while Hawk stalks Demetri through the halls before Demetri puts Daniel's training to use, kicking Hawk through a glass trophy case. Tory, frustrated, shifts her spiked bracelet to her knuckles, slashing Sam's arm before threatening to slice her face with it. Sam regains the upper hand and knocks her down a staircase. The climactic moment of the brawl comes when Miguel pins Robby to the floor, but — remembering what Johnny taught him about the difference between having no mercy and no honor — releases his rival while attempting to apologize. However, Robby’s anger finally boils over and he seizes the opening to attack Miguel, inadvertently kicking him over the stairway balcony. Miguel’s back strikes the steel railing on the way down, leaving him critically injured after a two-story fall. Shocked by the result of his actions, Robby promptly flees the scene. Both Sam and Miguel end up hospitalized, with Sam having suffered cracked ribs in addition to her lacerations. Miguel's prognosis is dire; the doctor tells Carmen the next 24 hours will be crucial to his recovery.

In the aftermath, Daniel and Johnny are devastated by what has happened. Facing pressure from his wife, and horrified by both Robby's actions and his daughter's injuries, Daniel decides to quit Miyagi-Do altogether. Johnny, in turn, has lost not only his prized student and the closest thing he had to a real son, but the love of Carmen, who now wants nothing to do with him.

Worse still, Johnny returns to his dojo, only to discover the remaining Cobra Kai students (minus Aisha and Bert) training under Kreese, who reveals that he has acquired the dojo's lease from Zarkarian and now owns Cobra Kai. Johnny tries to protest, but the students side with Kreese, blaming the younger sensei for what happened to Miguel. Heartbroken, Johnny states that resurrecting Cobra Kai was a "mistake", and abandons the dojo to Kreese.

On the beach, facing the sunset, Johnny drunkenly and miserably reminisces about Miguel. Fed up with it all, he throws his smartphone into the sand and leaves his Cobra Kai car behind. As he walks away, a notification appears on his discarded phone — a Facebook friend request from Ali Mills Schwarber.

"I tried my best. I thought I was doing the right thing. I'm sorry."
Feedback

All hell breaks loose between two karate dojos, which is shown in one continuous shot.

All hell breaks loose between two karate dojos, which is shown in one continuous shot.