Come Out, Come Out, Wherever You Are 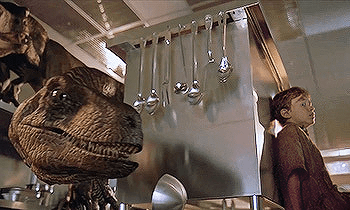 Whatever you do, don't say Polo.
"Could you come over here?"
— Turrets, Portal
Advertisement:

The boy fled, his breath coming in short pants. This room seemed perfect. An old metal staircase gave ample cover from the man chasing him.

His pursuer entered the room. The giant sword dragged along the ground behind him, drawing sparks.

"I know you're here, little boy," sing-songed the monster in the shape of a man. "Come out, come out, wherever you are!"

Like a deadly game of hide-and-seek, sometimes a villain will search for a hidden character. The villain will often be walking slowly, to increase dramatic tension. We may flash to their quary, hidden inside an air vent, behind crates, under a table or inside a bathroom stall.

Named for the line often spoken in a mocking singsong tone by the chaser, either to taunt the chased out of hiding or just to scare them. The line itself originates from the more innocuous context of the children's game Hide-and-Seek.