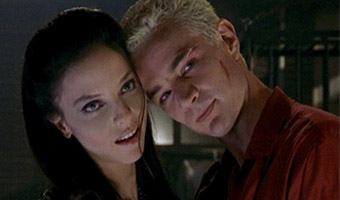 A match made in Bedlam.
"If every vampire who said he was at the Crucifixion was actually there, it would've been like Woodstock."
—Spike
Advertisement:

It's Parent-Teacher Conference night at Sunnydale High. In a fit of creative sadism, Principal Snyder assigns the job of preparing food and decorations to his two most troublesome students: Buffy, and a borderline-psychopath delinquent named Sheila. Whoever does the better job will not be expelled. Sheila's total indifference puts even more pressure on Buffy, who already has a tough time balancing slaying with a social life.

That night, the "WELCOME TO SUNNYDALE" sign is flattened beneath the tires of a 1959 DeSoto Fireflite, marking the arrival of the vampire world's answer to Sid Vicious & Nancy Spungen, Spike and Drusilla, who interrupt a gathering by the Anointed One. Spike promises to kill Buffy as he has killed two Slayers already. Drusilla is quite ill, having been injured by an angry mob in Prague. The Anointed One tells Spike to wait for Saturday night to attack Buffy, as that particular Saturday is essentially a holy night for vampires and will strengthen their mooks. Spike agrees, and in the meantime he brings Sheila, who is enthralled by his bad boy charms, to the weak Drusilla as food.

On Thursday night, Buffy plots to keep Snyder from delivering a bad report to her mother, but fails. Afterwards, a stern Joyce orders Buffy home just as Spike and the other vampires crash through the window, too impatient to wait for Saturday. Buffy takes command of the incredulous adults, tells them to stay put and climbs through the air ducts to reach the library and her weapons. Fighting a few vampires along the way, including a newly turned Sheila.

Xander returns to the school with Angel, who pretends to be Angelus. Though Spike first welcomes Angel as a long-lost friend, he sees through the ruse and Xander and Angel are forced to flee but not before Xander hears Spike call Angel his "sire" and "Yoda". His mooks give chase to Angel and Xander, leaving Buffy and Spike alone at last. Buffy is almost bested when her mother shows up and hits Spike over the head with the flat of a fire ax, causing him to retreat. Joyce tells Buffy that she trusts Buffy to take care of herself, whatever Snyder may say.

Spike returns to the vampire lair, where the Anointed One demands penance for attacking too early. Spike goes through the motions of apologizing—then, fed up, he simply throws the boy in a cage and pulls it into the sun. Looks like there's a new el jefe in town, one who looks like he may stick around for a while. You know, for fun and frolic.

From now on, we're gonna have a little less ritual and a little more fun around here!

Edited clips from Buffy the Vampire Slayer", third episode of the second season "School Hard". Drusilla shows off her vamp face when about to feed and later her victim, Sheila, does the same when about to attack Buffy.

Edited clips from Buffy the Vampire Slayer", third episode of the second season "School Hard". Drusilla shows off her vamp face when about to feed and later her victim, Sheila, does the same when about to attack Buffy.