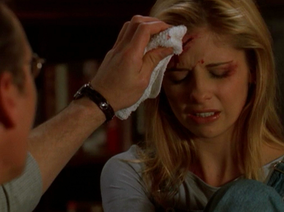 Travers: She passed. You didn't. The Slayer is not the only one who must perform in this situation. I've recommended to the Council, and they've agreed, that you be relieved of your duties as Watcher immediately. You're fired.
Giles: On what grounds?
Travers: Your affection for your charge makes you incapable of clear and impartial judgement. You have a father's love for the child and that makes you useless to the Cause.
Advertisement:

Buffy and Angel go a few rounds of fighting until Buffy pins him and holds a bread-stick to his heart. It quickly becomes awkward, as Angel's words inadvertently remind them of their sexless relationship, as well as the unresolved sexual tension between them. The situation itself becomes even more awkward when Angel, feeling slightly anxious, asks Buffy what she would be doing on her birthday and if she had a date. Buffy points out that she does have a date, describing him as "very handsome, older man who likes it when [she] calls him Daddy." Slightly amused at first, Angel realizes it's with her father, but then checks to make sure if she was really talking about him, seeming a bit tense and jealous. Clearly amused at Angel's puzzled look, Buffy nods and reveals that she plans to go to an ice show with her father on her 18th birthday. This makes Angel feel better.

That night in the library, Rupert Giles quizzes her on crystals, demanding that she focus her attention on them. Later, while on patrol, a vampire nearly kills her with her own stake as her powers unexpectedly fail her.

Back at the library, Buffy tries throwing knives at a target, but misses terribly. When Giles walks in, she asks if he knows what might be happening to her. Meanwhile, Quentin Travers, the head Watcher, is setting up a "test" for the Slayer, assisted by two men named Hobson and Blair. She is to be locked up in a building, without any powers and defeat a powerful and insane vampire—Zachary Kralik. Giles meets with the head Watcher, and expresses his ambivalence about this test - it is supposed to strengthen Buffy, but also seems cruel to him. At home, Buffy is disappointed to find that her father canceled their date at the ice show, because he chose work over his daughter. Later at the library she tries hinting to Giles that he could take her to the ice show, however he fails to catch on and has Buffy stare into another crystal to "find the tiny flaw at the center." When she falls into a trance, he injects her with a syringe before bringing her out of the trance, after which he agrees to send her home.

In the school yard, Buffy tries to rescue Cordelia Chase from an aggressive suitor, but he knocks her down leaving Cordy to fight the guy off herself. At this point, Buffy really begins to worry, and enlists the help of her friends to figure out what's wrong, however their research goes nowhere. Buffy visits Angel and he gives her a book for her birthday. She tries to sound enthusiastic about it, but losing her powers has really begun to bother her. He tells her about how he saw her before she was the Slayer and how he loved her from the second he first saw her.

At the Sunnydale Arms, where Kralik is being held, the vampire manages to rip the seams of his strait jacket. While Blair is getting his pills and water, Kralik kills him and turns him into a vampire. When Blair wakes up, he frees Kralik. Giles goes to find Travers at the Sunnydale Arms building, but instead finds that Kralik is free and Hobson is dead.

While walking home alone, Buffy is first confronted by two men looking for a lap dance and then Kralik. Blair chases her until Giles drives by and picks her up. At the Summers' home, Buffy's mother hears a noise out front and goes to check it out; she then finds Kralik wrapped up in Buffy's jacket.

Giles shows Buffy the syringe, and explains that it's a special mixture that is designed to take away her strength temporarily, and that he's been injecting her with it for the Cruciamentum, a test that every slayer must go through when/if they reach their eighteenth birthday. The objective was to test Buffy's other skills such as intelligence and resourcefulness by sending her to the Sunnydale Arms where she would be locked in with Kralik and would have been expected to kill him without her powers. Buffy is very hurt and tells him she doesn't know him anymore and that he should stay away from her or she'll kill him. Giles assures her that the test is invalidated because of what he has told her and that he will protect her from Kralik. Cordelia shows up to lend some books, but realizes something is happening and decides to leave. Buffy asks Cordelia to drive her home and Cordy, seeing Buffy is in an emotional state, agrees. When she arrives she finds a picture of her mother in the hands of Kralik. Buffy changes her clothes, grabs weapons and supplies, and heads out to find her mother.

Quentin seeks out Giles at the library. Giles explains that the test should be canceled because Buffy has been told of it and it has already gone wrong with Kralik's escape. Quentin replies that it is too late for that because Buffy has already entered the field of battle. Giles expresses himself about the Council's orders and leaves to find Buffy, hoping to help her.

At the Arms building, Blair attacks Buffy, but she pushes a bookshelf over on top of him and escapes. Kralik finds and chases her until his need for his pills becomes unbearable. Buffy steals them away, and slides down a laundry chute, where she finds Joyce tied up. Kralik breaks through the door, looking for his pills and water. After he swallows the pills, he's surprised to find out that Buffy tricked him into drinking holy water before he is dusted from the inside, Buffy tries to free her mother, but cannot because the knots are too tight. Blair reappears and lunges at Buffy, but Giles also shows up and stakes him.

Back at the library, Travers congratulates a beaten and bloody Buffy on her accomplishment, but Buffy is very bitter over the deception and the fact they let Kralik get away and target her mother and tells Travers that he should leave town before she gets her powers back. However Travers isn't finished as he states that while Buffy passed the test, Giles didn't as he didn't remain objective. Travers tells Giles that he's fired because he's grown too close with the Slayer—he has a father's love for Buffy, which he describes as "useless to the cause". Travers then states a new Watcher is going to be sent to train Buffy, and warns Giles he will be dealt with if he tries to interfere or undermine their authority. As he leaves, Travers again congratulates Buffy on her success. However Buffy, her voice full of contempt, simply responds with "Bite me". After Travers leaves, Giles further proves his devotion to Buffy by helping to clean her wounds which she allows him to, now fully aware of his depth of feeling for her.

The next day, Buffy celebrates her birthday with peanut butter and jelly sandwiches and her close friends. The gang learn about the previous nights events, and Joyce is very impressed with how Buffy killed Kralik while Willow is in shock that Giles was fired, despite Buffy assuring her that nothing is really going to change since he'll still be the school's librarian, and thinks about writing an angry letter. When Buffy, minus her strength, can't open the peanut butter jar, Xander offers to help, but he can't do it either.

Buffy the Vampire Slayer - Ep 46 [Helpless]: To prepare Buffy for her unknowing test, the Watchers Council have restrained a notorious vampire name Kralik for her to have to fight without her Slayer powers. However Kralik manages to free an arm from one of his restraints and tricks one of the caretakers, Blair, into getting closer so he can grab and drain him of his blood. Blair soon turns, his body morphing to heal up the bite wound Kralik gave him.

Buffy the Vampire Slayer - Ep 46 [Helpless]: To prepare Buffy for her unknowing test, the Watchers Council have restrained a notorious vampire name Kralik for her to have to fight without her Slayer powers. However Kralik manages to free an arm from one of his restraints and tricks one of the caretakers, Blair, into getting closer so he can grab and drain him of his blood. Blair soon turns, his body morphing to heal up the bite wound Kralik gave him.