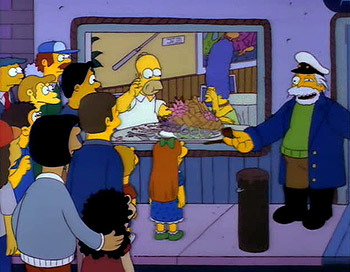 One of the more ethical examples of this trope.
"But who are these? for with joint pace I hear
The tread of many feet stearing this way;
Perhaps my enemies who come to stare
At my affliction, and perhaps to insult,
Their daily practice to afflict me more."
— John Milton, Samson Agonistes
Advertisement:

A character is exhibited for ridicule — while still alive. Special garments, signs with the proclamation of the offense, or even nudity may be enforced. Menial labor may be required. Rotten fruit may be thrown, but the character usually finds the staring humiliation enough (without a Humiliation Conga to make it worse). Perhaps even a Fate Worse than Death which is why it often makes for prime Moral Event Horizon material. Pride makes it worse, but no one really enjoys it. Most of the time characters that are meant to be sympathetic are on the receiving end of this but it can occasionally be justified as a dark way to Pay Evil unto Evil.

In Real Life, the pillory and the stocks were designed for this, but cages, chains, and even just guards may be used to keep the prisoner in place, or on the route of his enforced procession. It was particularly common in colonial societies, who often couldn't afford the loss of human-power that would come with extended imprisonment or execution. Though a Public Execution may have this as an added blow to the death.

Conversely, characters may come to gawk at a prisoner, for much the same effect. When the character has been Made a Slave, an auction may bring this on, even worsened by the fact that the purchasers don't care how humiliated the character is.

A defeated or demoralized character, even if not a captive, may greet another with this as a Stock Phrase, with accusations of coming to gawk at their shame, with snarls of Don't You Dare Pity Me!, even if the other character wants only to help. They may demand Get It Over With to avoid the gawking. Similarly, if their Pride convinces them that they came to gloat when they did not even know they were there.

The threat of this trope may lead characters to Leave Behind a Pistol or decide that it's Better to Die than Be Killed.

Compare Dead Guy on Display, which can be the same thing for a corpse. See also A Truce While We Gawk.

If the gawkers spontaneously show up to mock someone over accidental embarrassments, you're dealing with The Freelance Shame Squad. The comedic equivalent is Pass the Popcorn. The commercial version was used in The Freakshow where the performers were often paid well for their display.