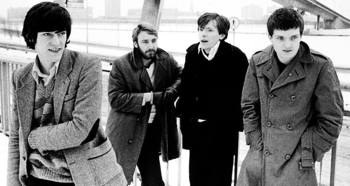 A well known English Post-Punk band, Joy Division formed after guitarist Bernard Sumner and bassist Peter Hook attended a Sex Pistols concert in Manchester on 4 June 1976, and were inspired to form a band. The additions of vocalist Ian Curtis and drummer Stephen Morris, completed the line-up. Initially named Warsaw (under which name they recorded an unreleased album, later bootlegged), the band changed its name to Joy Division in late 1977, which got them in trouble at first, because of its fascist overtones.

As Joy Division, they recorded an EP, which was basically Punk with literary lyrics. This and playing around Manchester, brought the group to the attention of Tony Wilson, and they joined his record label Factory Records. After a month in the studio with producer Martin Hannett, who completely changed their sound, their debut album Unknown Pleasures was released in 1979 to critical acclaim.

However, the relentless touring negatively affected the band. Ian Curtis had epilepsy, and sometimes experienced seizures during concerts, leading to their cancellation. His seizures were getting worse as the band continued touring, but he pushed himself to the point of exhaustion, as the band needed to tour to become better-known in the fairly exclusive music scene of the 1970s. He concealed the extent of his disability until the breaking point. His lack of sleep, alcohol abuse, and collapsing marriage only added to his severe depression; he committed suicide on 18 May 1980 (supposedly after watching Stroszek on TV and listening to Iggy Pop's The Idiot). Their second and final album Closer was released two months later to both critical and commercial success, and is widely seen as their masterpiece. The band was a key influence on Alternative Rock on both sides of The Pond over the next few decades.

Since they had a made a pact to change their name if anyone left, the rest of the band members renamed themselves New Order, alongside Morris' girlfriend (now wife), keyboardist and guitarist Gillian Gilbert, who helped formulate their new sound.

The band are portrayed by actors in the movies: 24-Hour Party People and Control. The former is a biopic of Factory Records head Tony Wilson, with Joy Division playing a major role, along with their manager Rob Gretton, in the first part of the film, with some remaining members throughout the second act as New Order personnel. The latter is a biopic of Ian Curtis himself, directed by photographer Anton Corbijn, who often worked with the band during their early years, and directed the music video for "Atmosphere".