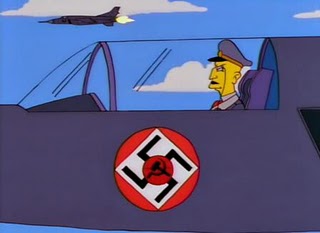 A mix of Communism and Fascism is frequently used as "the government we don't like" in fiction. The trope is in action when the heroes enter a Communist country and find that it's Putting on the Reich - or when soldiers in a Fascist army call people Tovarisch. Modern examples of this trope may be explicitly referred to as Nazbols or National Bolsheviks.

This trope is common and popular in the United States. Nazis became Acceptable Targets during WWII, Communists shortly after it, and both are foreigners from far-off places with strange un-American philosophies. Since both Nazis and Communists are villains by default, why not have characters who are both at once to be double evil? But this was never much more than a Comic Book trope, and is a Dead Horse Trope at best at this point; there were always people who knew the contents of Nazi and Communist ideologies, which have awkward similarities but are not quite the same thing.

Over in Europe, this trope is unknown, and somewhere between eye-rolling and fisticuff-inducing. Germans are still ashamed of what they got up to in the war years, and not really in the mood for joshing about it just yet. Russians are rightly proud of their massive effort in the war ("WWII was won with British intelligence, American steel, and Russian blood", as the saying goes) — and are nostalgic for the Soviet Union itself (and especially for Stalin), and for the high relative prosperity and world-historic significance that they had under the USSR. The countries caught between two fires in the war, however, suffered at the hands of both sides — to this day, some of these countries have banned both communist and Nazi ideologies.

There is, however, a certain degree of truth to this trope. Hitler himself was keen on recruiting former Communists in the Nazi party, saying You can always make a National Socialist out of a Communist, but from a Social Democrat - never. Likewise, many former Nazi officials were quietly recruited in the Communist party in the East Germany. Many officials in the countries caught between Hitler and Stalin managed to work for both sides (burning documents, scapegoating Jews, and giving just enough aid to La Résistance that you can claim you weren't a collaborator can work wonders). East Germany was Nazi-ruled until it was Communist-ruled, and their internal security forces, which had No Budget early on, used WWII surplus uniforms for much longer than you'd expect. (This made East Germans popular antagonists in US Spy Fiction.) And finally, both the SA and Communist street fighters came from similar Lower-Class Lout background.

Part of the problem can be traced to the Nazis themselves, or rather their official name, the National Socialist German Workers Party. This has lead certain political figures to denounce anything that they feel smacks of socialism as just another step on the road to swastikas and dodgy mustaches, with plenty of references to totalitarian Communism (especially Stalin) for good measure. Of course, there are three main problems with this belief: First, that Socialism and Communism aren't the same thingnote According to Marxist theory itself, "communism" is the hypothetical classless, stateless society of the distant future; "socialism" is the state run by 'the working class' in preparation for communism. Descriptors such as "communist state" do not make sense from this perspective—states such as the USSR or post-revolution Cuba always described themselves as "socialist" or "marxist-leninist". In common parlance, these terms tend to be used interchangeably, by both opponents and advocates of such ideologies.; second, just because the Nazi party used the word "Socialist" in its name doesn't mean it actually had Socialist (or Communist) objectivesnote The faction of Nazis who took the "Socialist" part seriously were purged in the Night of the Long Knives, along with many others who Hitler decided had outlived their usefulness., just like the Democratic People's Republic of Korea is none of those things and the Holy Roman Empire wasn't any of those things; third, that Hitler really, really, really didn't like Bolshevism, blaming the Jews for it, comparing it to a disease, and also kinda fought a war over that issue.

See this trope's analysis page for further discussion — and for some recent (2000s) movements which are unpleasantly close to being Defictionalizations of this trope. See also Nazi Nobleman, for a different conflation of two groups that historically didn't always get on.

open/close all folders
Anime & Manga
Comic Books
Film — Live Action
Literature
The P.O.U.M. was declared to be a disguised Fascist organization, and a cartoon representing the P.O.U.M. as a figure slipping off a mask marked with the hammer and sickle and revealing a hideous, maniacal face marked with the swastika, was being circulated all over the town by P.S.U.C. agents. Evidently the official version of the Barcelona fighting was already fixed upon: it was to be represented as a ‘fifth column’ Fascist rising engineered solely by the P.O.U.M.
Live-Action Television
Stand-Up Comedy
Tabletop Games
Video Games
Webcomics
Web Original
Web Video
Western Animation
This stinger was made by NazBol Gang!
Feedback

McBain and the Commie Nazis

The trope namer comes from an episode of The Simpsons, titled "King Of The Hill" where McBain is attacked by literal Commie Nazis while delivering UNICEF pennies to children.

McBain and the Commie Nazis

The trope namer comes from an episode of The Simpsons, titled "King Of The Hill" where McBain is attacked by literal Commie Nazis while delivering UNICEF pennies to children.