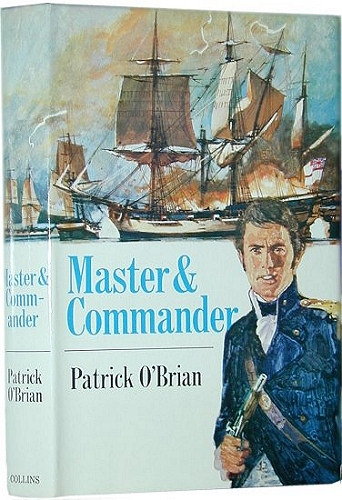 Yes, in the first published edition, Jack Aubrey was played by a young Clint Eastwood.
"It is all one," said Stephen. "They speak in tropes at sea."
— HMS Surprise (Book 3)
Advertisement:

Twenty-book series written by pseudo-Irish author Patrick O'Brian (born Richard Patrick Russ). The series takes place during The Napoleonic Wars, following the adventures of an English naval captain, Jack Aubrey, and his surgeon and particular friend, Stephen Maturin, who also works for Naval Intelligence. O'Brian also wrote the first couple of chapters of a 21st book before his death, which have since been published, along with his notes about what happened afterward.

The books start with Jack first meeting Stephen and getting his first command, and go on with no particular overriding plot, though there are several arcs carried through multiple books. Their beginning, middle and end points are also arbitrary; they read something like one very big novel.

The series was adapted into the film Master And Commander: The Far Side Of The World, which was released in 2003, directed by Peter Weir, starring Russell Crowe and Paul Bettany. It was critically acclaimed, reasonably successful at the box office and nominated for various awards including the Best Picture and Best Director awards in the 2003 Oscar Awards, only to get beaten in most categories by the final Lord Of The Rings film.

Titles in the Series (Year of First Edition)

The series was adapted into a 2003 film starring Russell Crowe and Paul Bettany, Master and Commander: The Far Side of the World, which was intended to become the first installment in a series of films (one critic, The Atlantic's Christopher Orr, has argued rather persuasively

that it should be turned instead into a Game of Thrones-like HBO-style cable TV series). Several books, among them Master and Commander and The Far Side of the World, were used as inspiration for the film.

Novice readers are sometimes advised to start with the third book, H.M.S. Surprise, to acclimate themselves to the relatively laborious, jargon-laden prose style with a more action-y plot before they attempt to read the two earlier volumes. Even experienced readers are advised to acquire a copy of Dean King's Sea of Words, the 500+ page handbook and lexicon companion to the series.note Reading on a Kindle (or similar device) can also be very helpful; it saves a lot of time to be able to hold your finger down on, say, "solomongundy", and see a definition. Paper books don't have this feature yet. King's Harbors and High Seas can also be useful to the reader, as it includes all the necessary maps to keep track of where events happened during the series, as well as the state of the world at the time. It is important to note that it is entirely possible to read the series without these aids; they are useful, but as one of the two main characters' jobs in the series is to have the essential naval matters explained to him, even if the reader does not know exactly what a "waister" is, the action of the book will still make sense.

Nelson's Navy: The Ships, Men, and Organization, 1793-1815 by Brian Lavery is also an excellent companion to the series, but rather pricey. And for the culinary-minded, there's Lobscouse and Spotted Dog: Which It's a Gastronomic Companion to the Aubrey/Maturin Novels by Anne Chotzinoff Grossman and Lisa Grossman Thomas.

A newer online companion, currently in progress, is the Patrick O'Brian Mapping Project

, which uses Google Maps to trace, with surprising accuracy, the various comings and goings of both Aubrey and Maturin; it is about halfway done at last count, and progressing quite nicely.

Compare with Horatio Hornblower, the final novel of which was published in 1967, two years before Master and Commander was published. Also see David Drake's RCN novel series, which is more or less Aubrey-Maturin IN SPACE!

For film examples, go to Master and Commander.

The Aubrey-Maturin series contains examples of: