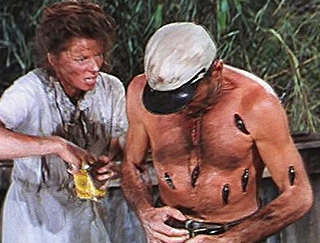 Gwen: Where'd all this water come from?
Heather: How should I know? Why don't you ask the leeches?
— Total Drama, "Camp Castaways"
Advertisement:

Subtrope of Clingy Aquatic Life. Whenever a character accidentally falls into a body of water, especially a stagnant one such as a swamp or pond, expect them to come up and discover a leech — or more — attached to them somewhere. This is usually followed by an ear-splitting scream. Often Played for Laughs, but can be used to induce Squick in the viewer or show the harsh reality of the work's setting, particularly as a subversion of Cool, Clear Water or Skinny Dipping.

Incidentally, should you ever act out this trope and discover a leech attached to you, do not rip it off, squeeze it, salt it, burn it, or otherwise disrupt it like these characters may do — it will vomit harmful bacteria into your open wound if you do. Instead, gently but quickly peel it off with a sharp object or your fingernail directly where its sucker is attached to you (or just let it drink its fill and drop off harmlessly).