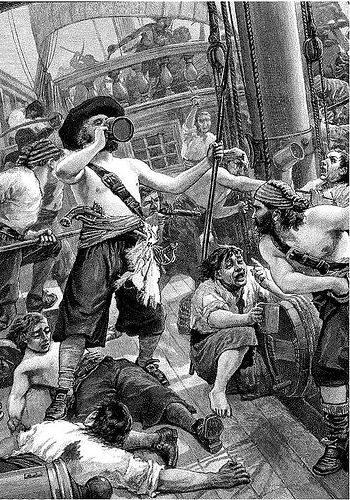 Sailors and alcohol go together like white on rice, going back to Homer. In fiction, if a sailor isn't already drunk, expect them to be well on the way to it or pining for the lack of it. Often a defining quality of a Father Neptune. One can also expect a Seadog Beard and some Talking Like A Pirate. Yarrrr!

This is a case of Truth in Television due to the disinfecting abilities of alcohol; mixing it with water was the only way to keep water potable during long voyages, especially on early boats when cooking had to be limited due to fire risk (or on open decked boats where it was impossible to do). Also, a drunk crew was a crew less capable of The Mutiny due to the horrific conditions (this being the "rum" part of those great Naval traditions of "rum, sodomy and the lash"), and the strength of alcohol could be varied as punishment or reward as the captain saw fit. It continues to be true because when you take a bunch of generally adult persons and put them in a cramped space for an extended period of time with limited and ever diminishing supplies... well it rather builds tension.

Of course, Sailors are just as often drunk on shore as well as off, where they can get into all kinds of trouble, from bar fights to getting Press-Ganged onto another ship.

Especially prevalent in works set in the era of Wooden Ships and Iron Men or in the future since Space Is an Ocean. As a sidenote, the actual ration issued up until 1740 in the Royal Navy was a gallon of beer or a pint of wine or half a pint of spirits per person per day. Admiral Vernon then cut this to a quarter pint twice a day, mixed with water and limes to prevent scurvy, and eventually it became the traditional 1/8 pint "tot" which was officially retired in 1970.

There were some very uncomplimentary epithets levelled at the Admiral responsible and the day is still known as Black Tot Day.

Whatever the origins, The Drunken Sailor is an unavoidable character, specific Sub-Trope of The Alcoholic.