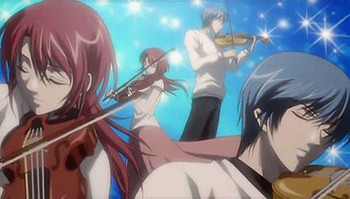 You can see the sparks flying.
Kim: Susan Nicoletti and I have been working on a new orchestral programme for the holodeck.
Paris: Lieutenant Nicoletti? The one I've been chasing for six months? Cold hands, cold heart?
Kim: [smirk] Not when she plays the oboe.
— Star Trek: Voyager, "The Thaw"

Duet Bonding happens any time a pair of people become a little closer because they play music together. This can lead to a new Love Interest, or just help them get to know each other a bit better. The piano is the most often used instrument, probably because the pair needs to sit close together to play.

On occasion, only one of the two makes music, while the other dances to it. A lighthearted option is Karaoke Bonding Scene.

A sub-trope of Let's Duet. See also Dance of Romance, Love at First Note. May introduce a Love Theme.