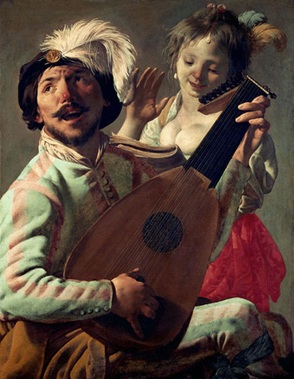 A duet is any piece of music made for two singers or instruments. They show up mainly in music-oriented media, like songs, musicals, and opera.

Due to the intimacy that comes with sharing a song, by far the most common form of duet is the Silly Love Songs type, where the two participants are meant to be lovers. Some composers play on this intimacy to give the duet a humourous or unsettling feel— for example, having two Heterosexual Life-Partners sing about their bromance, or giving the hero and the villain a duet to show they’re actually pretty similar.

Of course, that's only the thematic reason for duets; there are many other reasons for having them, including boosting a song by having two star performers lend their voices to it. Compositionally, duets are nice because the performers can harmonize, adding an extra layer to the song that would otherwise have to be achieved with backup singers.

The Award-Bait Song is often a duet. Compare Serenade Your Lover.

In this type of karaoke outing, the Mii onstage is nervous to perform, so their partner decides to sing with them.

In this type of karaoke outing, the Mii onstage is nervous to perform, so their partner decides to sing with them.