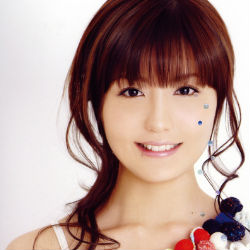 Moe personified through her voice.

Ai Nonaka (nicknamed "Ai-pon") is a seiyuu born in Fukuoka in 1981. She was once the head of the drama club and wanted to enter the Takarazuka Revue, which require Wholesome Crossdresser actresses. Instead, she wound up a seiyuu. She is usually pigeonholed as The Ditz. Her interest in voicing anime came from watching YuYu Hakusho, and as such, went to school for that instead. She also recently acquired a level 2 certification in aromatherapy. Ai Nonaka also has a monthly column in a magazine about seiyuu.

She also happens to be a YouTuber who often streams herself playing Nintendo games.

She got married sometime in August 2017 to a man not involved in the voice acting industry.

Studio Shaft seems to love her a lot.

"This article can't be over! It's just...trying to make itself shorter!"
Which Ai-pon are you?