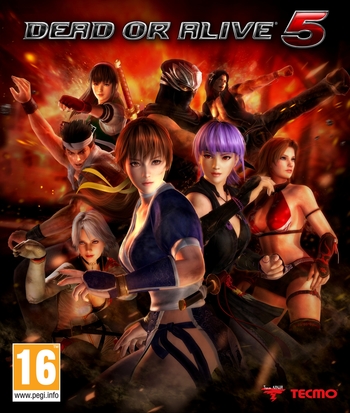 The cast of Dead or Alive 5—Kasumi in the center; counter-clockwise from the bottom right: Ayane, Tina, Rig, Hayabusa, Hitomi, Akira, Christie.
I'm a fighter.
Advertisement:

Nearly all the fighters of the previous game (except Leon) were back, as well as two newcomers named Rig and Mila. The game had a deep graphic upgrade from DOA4 (not surprisingly, since it had been 7 years since then) and an aesthetic redesign that showed more realistic characters, with smaller and less anime-like eyes, the same to what was shown in Ninja Gaiden 3. Special mention to the girls, who have more realistically proportionate bodies, although the Jiggle Physics were still in full display. In collaboration with Sega, Dead or Alive 5 also features Guest Fighters from the Virtua Fighter series. Akira Yuki, Sarah Bryant, and Pai Chan are the chosen Virtua Fighter representatives to Dead or Alive 5. The games were released for PlayStation 3 and Xbox 360, plus a port to the PlayStation Vita half a year later.

In May 2013, Team Ninja announced an Updated Re-release of DOA5 for PS3 and 360: Dead or Alive 5: Ultimate. The game includes new stages and characters and rebalancing. The game was released on Fall of 2013.

In August 2014, Team Ninja announced the game would be ported to Playstation 4 and Xbox One as Dead or Alive 5: Last Round. Last Round would include the three new fighters introduced in the arcade port (which had been Downloadable Content in console versions of DOA5U), as well as two additional characters, two new stages, new costumes and customization options included in the package. Last Round will also get a release for 360 and PS3 as a downloadable add-on for current Ultimate owners. A trailer released on December 4, 2014 also revealed Last Round would get a PC release via Steam. The console versions of Last Round released on February 17, 2015, with the PC version released on March 30.

Characters added in Dead or Alive 5: Last Round: