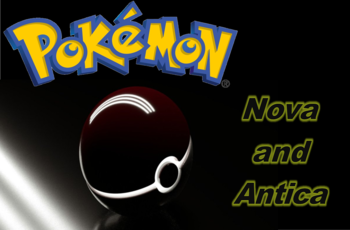 Combining the old with the new

A ferry was now treading the vast ocean. It's destination; the Tenla Region. The boat was loaded with trainers ready to conquer a new region, one filled with chances. But, someone had a more fervent enthusiasm than anyone else and his name is Ash Ketchum. Follow him with companions both old and new as they fight and meet old and new things. And to confront the darkness hiding beneath everyone in Tenla.
—Official summary

Pokemon: Nova and Antica is a Pokémon fanfiction written by Grade-AMasterpiece set in the anime's universe. The timeline places the story in-between Ash's adventures in Sinnoh and Unova; although, elements like Pokemon themselves from Unova and beyond are fair game to the narrative.

Our hero Ash Ketchum is relaxing at home in Pallet Town, reminiscing his time and achievements in Sinnoh, but there's never a dull moment with this kid. Professor Oak visits the Ketchum residence one day and tells him about a new region, the Tenla Region. Leaving all of his Pokemon besides Pikachu at home as per tradition, Ash sets out to conquer a new region in hopes of attaining his dream of becoming a Pokemon Master.

Combine this premise with the presence of Tenla-native Pokemon note  or "Fakemon" as the fanbase calls , this sounds like a standard, travel-to-a-new-region story. Sure, but there's a twist. To Ash's surprise, the first person he meets in this new land is instead an old and familiar face, Misty. Then, he finds out Gary is coming to challenge Gyms for old time's sake. Then, Brock, Dawn, and May all make their appearance. He also finds himself thrust into the middle of things minutes after arrival, and it doesn't slow up from there. Not with the threat of Team Hectic hanging over everyone's head. There is a lot more to this story than meeting new Pokemon and battling rivals, it seems.

Nova and Antica is the main installment of a saga called the "Pokemon story series". Its other components are:

You may find Pokemon: Nova and Antica on different sites under the same account name: FanFiction.net

, latter of which contains all that, glossaries, and artwork of the original characters and concepts featured to breathe life into this story.