We Are Experiencing Technical Difficulties 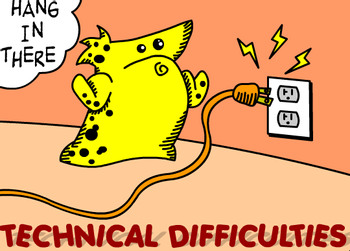 Nonononono! Oh. My god. Oh my god. It's the sum of all my fears. I don't know what happened. Cut the cameras! Cut to commercial!
— Binging with Babish, "Tiramisu from Superbad"
Advertisement:

However, when this happens in fiction, it indicates not mundane malfunctions, but something either funny or deeply disturbing. And the latter usually happens when the news is being aired, or in the newsroom itself.

Sometimes played for Black Comedy if the presentation of the message sharply contrasts with the horror of the scene. An even darker version is when the message is displayed, but the horrible noise in the background indicates what is actually going on. It may also happen if the Genre Blind news reporter tries to get an exclusive interview with the Eldritch Abomination.

There may be other not-really-technical difficulties such as a fight breaking out on live TV or a performer (or news anchor) having an emotional breakdown, disrobing on live TV, dying, or saying something so controversial that it will cause backlash from the network censors or, worse, the FCC (and their national equivalents abroad). Actual technical difficulties are vanishingly rare in fictionland, and thanks to many stations now being run by their corporate owners from one hub (for instance, Fox runs many of their owned stations from New York City, Chicago, Los Angeles and Houston), in reality also. Sometimes the message pops up as a result of Camera Abuse, which could be a valid case of technical difficulty.

Can be used similarly to News Monopoly — if every station is Experiencing Technical Difficulties at the same time, something is seriously wrong.

Compare with Relax-o-Vision (an innocuous image is substituted for a disturbing one), Do Not Adjust Your Set (an outside intrusion overrides the signal), and Snowy Screen of Death (damage to the camera causes the signal to flicker out and die).

Often, "Spanish Flea" from Herb Alpert and the Tijuana Brass will appear as background music in this trope, or an instrumental recording of "The Girl From Ipanema", which also shows up in elevators. Sometimes the Intermission

song from Monty Python and the Holy Grail is used as well, particularly among video game streamers or in Web Original works where copyright isn't as much of an issue.

Buzz Lipman gets dropped down a trapdoor by Cookie, and the game has to pause while Helen and Cookie argue.

Buzz Lipman gets dropped down a trapdoor by Cookie, and the game has to pause while Helen and Cookie argue.