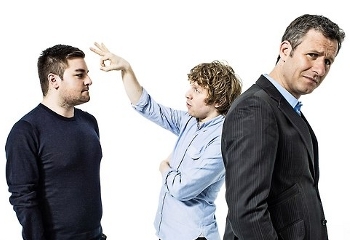 From left-to-right: Alex Brooker, Josh Widdicombe, and Adam Hills
"Hang up your lampshades and go out for a wiki walk. It's Friday, we're live, and it's time for The Last Leg."
Advertisement:

The Last Leg is a topical comedy show on the UK's Channel 4, which originally ran as part of the main coverage of the 2012 Paralympic Games, and proved so popular that it was spun off into its own show tackling the week in politics; currently, three series are shown each year, running for about half the year in total, with the show airing nightly during the Paralympics. The show is hosted by Australian comedian Adam Hills with co-hosts comedian Josh Widdicombe and journalist Alex Brooker, joined by one to two special guests each week (usually comedians, although actors and politicians sometimes appear too).