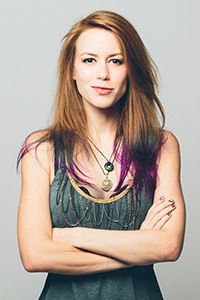 Marisha Ray (born May 10, 1989 in Louisville, Kentucky) is an American actress from Louisville, Kentucky. Despite being a relatively new talent in the voice acting scene, Ray has carved out her own position in the community with her ambition to act and produce. She served as the Creative Director at Geek & Sundry from July 2017 to June 2018, stepping down to become the Creative Director of Critical Role's new studio.

Example of:
Did You Just Punch Out Cthulhu?