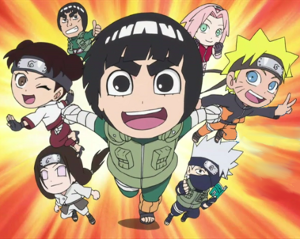 Rock Lee's Springtime of Youth is a comical spinoff of Naruto written by Kenji Taira. note Rock Lee no Seishun Full-Power Ninden is the Japanese/English name, Rock Lee & His Ninja Pals is the name of the anime in English, and Rock Lee's Springtime of Youth is the translation that was used for the English manga. As the title suggests, the manga focuses on Rock Lee, the Hot-Blooded Ninja who solves problems using only his fists. Joining him are the other members of Team Guy: Neji Hyūga, the serious, intelligent prodigy; Tenten, the Chinese weapons user; and Might Guy, Rock Lee's incredibly boisterous sensei. Together, they solve problems and fight evil ninjas in incredibly hot-blooded and awesome ways.

The manga was serialized from 2010 to 2014 in Saikyo Jump, the little brother to Shonen Jump that features similar shonen spinoff manga like Gourmet Gakuen Toriko, Chopperman!, and Dragon Ball SD. It also had a 51-episode anime adaptation, which aired in Japan from April 3, 2012 to March 26, 2013, replacing Bleach's timeslot.

, where it's titled Naruto Spin-Off: Rock Lee & His Ninja Pals. There is also a Nintendo 3DS video game based off the series, Naruto SD Powerful Shippūden.