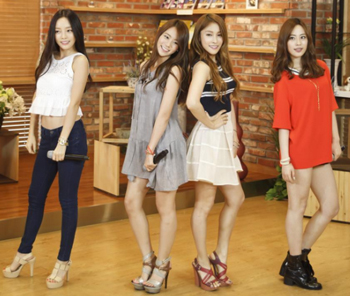 There had several lineup changes throughout the years. The original lineup of the group was Sunghee, Nicole, Seungyeon and Gyuri. In early 2008, Sunghee had to quit and two new members Jiyoung and Hara joined. Then in 2014 both Nicole and Jiyoung left in January and April respectively. Soon afterward, DSP launched the "KARA Project" competition for new potential members to be judged by the three remaining members - this is how Youngji came to join the group

◊. The group came to an end in early 2016 when Hara, Seungyeon and Gyuri's contracts all expired and they left the group

, and their official disbandment was announced on January 14, 2016. They reunited under a lineup of Gyuri, Seungyeon, Nicole, Jiyoung and Youngji in 2022 to commemorate their 15th anniversary, with Hara being a notable absence since she committed suicide on November 24, 2019 after being involved in a legal case with here ex-boyfriend in 2018.

They had a very solid career, with their 5-member lineup in particular being the most successful; with this lineup they first gained nationwide acclaim through their single Pretty Girl, and their popularity grew drastically from there, with hit songs like Lupin and Mister. They were especially popular in Japan, becoming one of if not the most successful kpop girl group there.

The group has also gained a bit of fame amongst Rhythm Game players when their songs were licensed out for DJMAX Technika 3 and DJMAX Technika Tune, as well as DJMAX's sibling game Tapsonic.

Not to be confused with the tech demo by Quantic Dream.