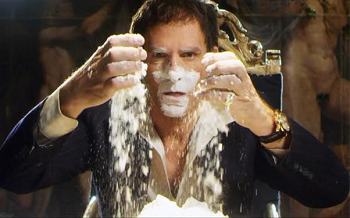 A scene where drug use is depicted/described but the amount shown/said is insanely large for personal use. Something like someone suggests doing some cocaine and someone brings out a restaurant cloche (one of those huge metal plates with the large domed covers) and removes the lid to show a pile of cocaine two foot across and one foot high. Or someone says they smoked six ounces of dope last night.

Generally barring exceptional cases this doesn't happen in real life. Illegal drugs are by definition... well, illegal, and anything illicit, illegal or otherwise prohibited that is nonetheless still in demand tends to multiply in cost accordingly.

Can be a case of bad research on the writer's part — not knowing the actual street value of the amount they are showing and how little it takes to get high, or suffer an overdose, and getting carried away by Rule of Cool.note Cocaine is ~$120 per gram in the US as of 2019. Recreational use usually is in the range less than a gram. In real life, we can't quite get it Tested on Humans for obvious ethical reasons, but the LD 50 of cocaine taken by mouse orally is 95.1 mg/kg. Assuming this applies to humans, this means just 5.7 grams have a 50% chance of killing a 60kg person.

One form of Conspicuous Consumption. Nothing to do with Weird Weather, though it would be a definite justification for this trope.