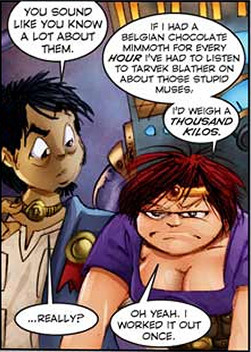 "When someone says 'We've got people everywhere', you expect it to be hyperbole! Lots of people say that. Florists use that expression. It doesn't mean that they've got somebody working for them inside the bloody room!"
— M, Quantum of Solace
Advertisement:

It is a staple of fiction, and indeed casual dialog in Real Life, to exaggerate when describing something. Everyone has heard it before: "I'm gonna hit you into next week!" "I'm the biggest baddest guy in town!" "He's the size of a house." We all know the people saying these things don't actually mean what they're saying. They're just using dramatic flair, that's all. It enhances the conversation or makes it funnier. So when the Mighty Glacier tells his opponent that he's about to be punched through a wall, he can't actually do what he just said.

Unless he then proceeds to do exactly what he just said.

That's where this trope comes in. Not Hyperbole is when exaggerations and hyperboles that we've all become used to in conversation is neither exaggeration nor hyperbole. The character means exactly what he just said and nothing less and usually proceeds to prove it.

Usually part of a Badass Boast. See also Literal Metaphor, and All of Them. Literal Ass-Kicking is a subtrope. "Not Making This Up" Disclaimer is a common variation. My God, You Are Serious! may follow as well if another character realizes that this trope is in play.