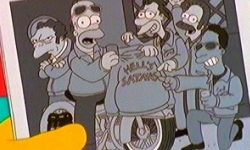 Homer wins a vintage motorcycle at a dance competition at a '50s nostalgia diner and creates a biker gang called the Hell's Satans — until a real biker gang with the same name crashes at the Simpson house.