Aren't You Going to Ravish Me? 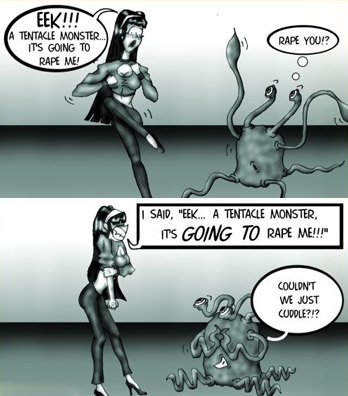 Not every Martian needs women.
"I was raised Catholic. I was never molested as a child, and frankly, I'm a little bit insulted. Wasn't I pretty enough?"
— Bill Maher, Real Time with Bill Maher
Advertisement:

The barbarians are past the gate, up the stairs, and standing over the hero's incapacitated body. The pure, virtuous, virgin damsel is now helpless against what is sure to be a lewd, ravishing, and depraved assault against her purity. In desperation, she grasps the nearest blunt object, determined to protect her maidenhood with every ounce of her strength. The barbarians leer at her, coming closer and closer. There are too many of them, and she closes her eyes, preparing to feel the grip of one of their dirty, grimy paws on her flawless skin.

The damsel opens her eye to see the barbarian horde taking interest in something completely different. Maybe it's Yet Another Baby Panda. Maybe someone cued the flying pigs, and the barbarians have just got to take a look at this. Maybe all they wanted was her golden necklace. Maybe sexual assault just isn't their thing. Maybe they just happen to be gay. Whatever the reason, the barbarians make it clear that they have no interest in the damsel whatsoever.

Her reaction: incredulous at best, downright insulted at worst. Who wouldn't be: damsels put a lot of effort into being pure and fair, and it's offensive to blow up castles, slay tons of palace guards, and break apart all of that furniture, just to ignore the goods once you get there.

Basically, any time a character (usually female) in a story is ignored or passed over in a situation that would seem to suggest that she was about to become the target of some kind of sexual assault before the trope came into play, and she becomes angry about it, even though logic would dictate that she would be pleased with this turn of events. Apparently, the woman feels insulted that she is seemingly not attractive enough to be the target of such actions, thus warranting indignation. It's not that she wants to be assaulted per se, but getting passed over like that hits right in the pride, you know?

A slightly more innocent variation is in the cases such as Funbag Airbag or Thanks for the Mammary, or other Accidental Pervert moments, in which the "victim" is left upset/disappointed that it was unintentional.

This trope is usually sexual in nature, though variants can include non-sexual examples of victimization ("The monster isn't trying to eat me? What, am I not delicious enough?" "What do you mean they didn't want to steal my Cool Car?" "Why the hell is the bounty on my "Wanted!" Poster so cheap?"). Similarly, though the would-be victim is usually female, males can be targeted, though their would-be aggressors are more likely to be male, or use one of the non-sexual variants. When male-on-male situations do use the sexual variants, the would-be victim is often portrayed as homophobic for an extra bit of irony.

If it's the hero who's refusing to take advantage of the heroine, this can overlap with Above the Influence or Not Distracted by the Sexy. Especially irritating if the character has been complaining that All Men Are Perverts; then complains when this happens. Sister Trope to Why Isn't It Attacking? and Too Kinky to Torture. Also related (in a twisted, Freudian way) to Compliment Fishing. Also compare Power Dynamics Kink. For moments where the woman is angry because she was hoping to get some, see All Women Are Lustful.

Alya takes being replaced as sacrifice rather personally.

Alya takes being replaced as sacrifice rather personally.