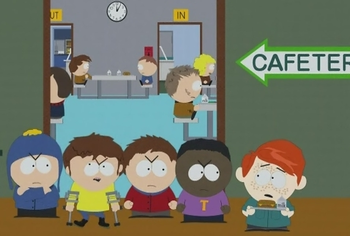 When even the token minorities reject you.
Advertisement:

The high tendency in fiction for young nerds, geeks, and other social outcasts to have red hair.

They're often gingers, redheads with pale skin and freckles, but not necessarily. They might have intellectual hobbies like reading. Their clothes are probably far from stylish and they are likely to have minor health problems. They are easily picked on for these things, not necessarily for their hair color, unlike the Red-Headed Stepchild. They also have a tendency to be a Shrinking Violet. If they're not then they'll be an uncontrollable Fiery Redhead who gets into big trouble. Despite how different they are, they can grow out of it and by the time they mature they can be expected to blossom into a self-assured person who is calm, strong and elegant. In the mean time they will probably make a loyal friend.

The character might think that it's just their hair color making people look down on them like the Red-Headed Stepchild, but if it was a different color they wouldn't be so self conscious and make themselves look bad. Dye jobs tend to backfire though. A sign of maturity is fixing up their hair but keeping it red.

The Brainy Brunette can similarly not fit in, but their geeky intelligence gives them a calm confidence that the redhead lacks. If the character has red/brown hair they only count if it's noticeably red and they have that lack of confidence among their peers.

On the other hand, mature redheads are wanted by heroes. Being Truth in Television varies between individuals, but No Real Life Examples, Please!