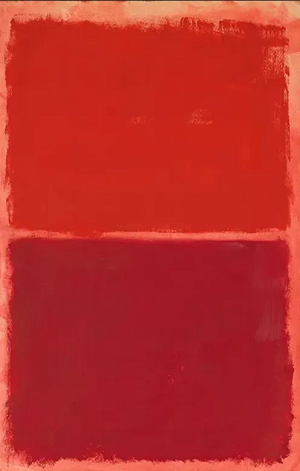 "Untitled (Red)", Mark Rothko
"Red is such an interesting color to correlate with emotion, because it's on both ends of the spectrum. On one end you have happiness, falling in love, infatuation with someone, passion, all that. On the other end, you've got obsession, jealousy, danger, fear, anger and frustration."
— Taylor Swift
Advertisement:

There's just something about the color red in the human psyche. It's the lowest visible color on the human color spectrum. It's the color of blood and therefore danger, warnings, and anger. But it is also the color we associate with fire, and therefore power, warmth, love and passion (and sometimes evil), and is a popular color in flags and heraldry. Much unlike pink, red can be seen as a very masculine color, if not more than blue. However, it's also a common color for mature, seductive ladies. If a language has only three primary color terms, they will invariably be black, white, and red.

Therefore, this is an index of tropes involving the color red.