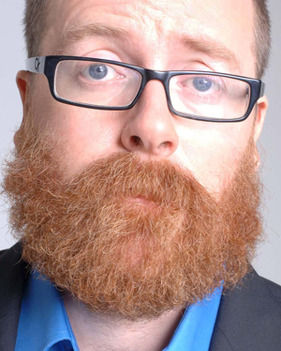 Francis Martin Patrick "Frankie" Boyle (born 16 August 1972) is a Scottish comedian and writer known predominantly for his cynical and very dark material. The Glaswegian's uncompromising humour has gained him many loyal fans and the constant fury of the Moral Guardians. It goes without saying that if you're easily offended, and aren't aware of who Frankie Boyle is, it's best to move on and forget this page ever existed.

Whilst he got his first big break at The Stand Comedy Club in Edinburgh, Boyle reached a mainstream audience due to his appearance as a regular on Mock the Week. Described as the "dark heart of Mock the Week" by host Dara Ó Briain, he quickly became the most popular member of the panel show. However, his risqué jokes soon caused friction with the production team and The BBC Trust. Eventually, Boyle decided he had enough and left the show permanently toward the end of 2009, claiming that the higher-ups were too scared of "frightening the horses".

His career hit a speedbump in November 2010, Channel 4 released his new sketch show, Frankie Boyle's Tramadol Nights, which included a joke involving Katie Price's disabled son Harvey. This caused an extreme wave of controversynote When you manage to sink lower than Bernard Manning who for all his faults refused to tell jokes about disabled kids as "they couldn't help it" then you really must want to torpedo your career, despite the fact that he told the same joke during his 2010 stand up tour (with the DVD being widely available at the time). While Boyle didn't withdraw from public life completely, he announced that his latest stand-up tour The Last Days of Sodom would be his last as he wants to spend more time with his family and is tired of touring.

Boyle eventually made a return to touring and television in 2012. He hosted a special for Channel Four entitled The Boyle Variety Show, which was a mixture of Frankie doing stand up and several other acts including comedians and musical performances in the style of a Royal Variety Show. While it was generally well received, Boyle managed to stir up more controversy with a series of jokes about the 2012 Paralympics (Which Channel Four has exclusive broadcasting rights to) on his Twitter account. He ended up staying away from Channel 4 for an entire decade before returning to present a documentary in 2022note It was about the British Royal Family but had to be shelved when Elizabeth II passed away.

The upswell in political conservatism around the world, along with the increasingly-unsettled context of British and European politics (particularly the lead-up to the 2015 Scottish referendum, the 2016 "Brexit" vote and the election of Donald Trump to the US Presidency) gave Boyle fresh opportunities to build a new audience. With the global situation becoming a well-spring of satire, his hard-left stance on many issues struck a chord with the public and this brought him back to The BBC (first in the Autopsy iPlayer specials and then BBC Two via Frankie Boyle's New World Order plus some documentaries).