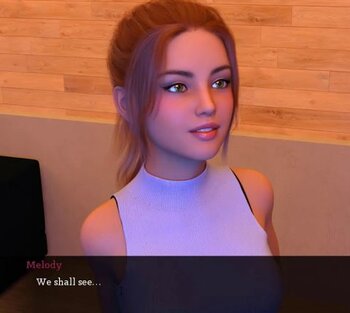 Shawty is a Melody in my head.
Advertisement:

Melody is an episodic adult visual novel. It was developed by Mr. Dots Games, along with a team.

The story starts with the main character (MC for short) getting kicked out of his house by his fiancée, Bethany. While crashing at the house of his friend, Tim, he has a chance meeting with a woman, Amy. After chatting with MC, Amy wants to hire him to tutor her 19-year-old niece, Melody, in music. MC isn’t initially keen on her offer, but he accepts after he learns that Bethany plans to seize all their shared assets with the help of a lawyer.

MC moves into an apartment that Amy sets up for him, and starts tutoring Melody. He quickly learns that his student’s previous life experiences have left her with deep emotional scars that continue to plague her personal life, and that he’ll have to teach her about much more than music. He rises to the occasion, becoming her trusted friend and confidant.

However, MC does teach Melody a great deal about music as well, from learning the basics of playing a variety of instruments to selecting the ones she likes to play to overcoming her fear of performing in public. This last one proves most important: Hank Sharp, a local record executive, watches one of her early performances, and is impressed enough that he soon offers her a record deal at his label.

But as Melody’s career starts to take off, she and MC develop feelings for each other, and the two of them need to reconcile their romantic relationship with their teacher/student, and later professional, one.

Not that Melody is the only woman that MC can pursue now that he’s single again. He can also date Amy, who is a classy lady looking for a good man, Isabella, his old high school crush whom he’s just run into again, his shy next-door neighbor Becca, Melody’s flirtatious and fun-loving best friend Sophia, and Xianne, a waitress and a schoolmate of Melody’s and Sophia’s who befriends MC and Melody.

However, whichever one (or more) he chooses, MC must deal with some lingering loose ends that eventually show themselves. Bethany eventually wants MC back, and Steve, Melody’s ex-boyfriend, wants revenge on her for humiliating him. Plus, things could blow up in MC’s face if he doesn’t tread carefully with his romantic decisions, especially if he dates multiple women at once. Can MC turn Melody into the next big music superstar while building a fulfilling life for himself?