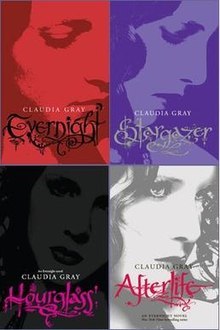 Evernight Academy, where high school literally sucks. note Top-left to top-right: Evernight, and Stargazer; bottom-left to bottom-right: Hourglass and Afterlife. Not pictured is the fifth book and Spin-Off Balthazar
Advertisement:

Evernight is a series of young adult Paranormal Romance novels, published between 2008 and 2012. The series was written by Claudia Gray (real name Amy Vincent); Evernight was her debut novel.

The series primarily revolves around Bianca Olivier, a teenage girl attending the mysterious Evernight Academy, where she doesn't seem to fit in with the snooty, predatory students. Bianca falls in love with a fellow outsider named Lucas Ross, but their relationship is threatened when they find themselves caught on opposite sides of a deadly conflict between vampires and the humans that hunt them. Surrounded by enemies on both sides and not knowing who to trust, Bianca and Lucas can only rely on each other to survive and uncover the secrets behind Evernight Academy. The series often draws comparisons to Twilight, for obvious reasons.

The fifth book, Balthazar, is technically a direct continuation of the series, but focuses on the secondary characters, Balthazar More and Skye Tierney. It revolves around the vampire Balthazar's mission to protect Skye from his evil sire, whilst coming to terms with his dark past and struggling with his growing affection for Skye.

Gray has also written two short stories, "Free" (2008) and "Bloodshed" (2010) set in the Evernight universe, which were published in the anthology series Love Stories With Bite; they are prequels revolving around supporting character Patrice Deveraux.

The character page can be viewed here.

Due to the sheer volume, spoilers for the first book are unmarked.