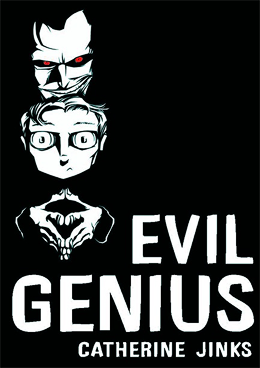 "Whatever you do, don't get caught."
Advertisement:

A trilogy of novels by Catherine Jinks following the life of Cadel Piggot, a Child Prodigy with a love for systems of all kinds. When Cadel is caught hacking into government databases at the tender age of seven, his adoptive parents take him to a children's psychologist named Thaddeus Roth. Instead of holding him back, Thaddeus encourages Cadel's talents, teaching him how to effectively manipulate systems however he pleases. It is revealed that Cadel's real father is the brilliant Evil Genius Dr. Phineas Darkkon, and it's time for Cadel to follow in his father's footsteps.

Several years go by, and Cadel is now attending the Axis Institute, a university for the gifted. At this school, they don't study computer science, accounting, physics, or philosophy- They study infiltration, misinformation, explosives, and pure evil. This is a school for evil geniuses ready to earn their degrees in World Domination. As you might expect, however, things aren't quite that simple. The school is filled with lunatics and freaks, and everyone is looking for opportunities to manipulate everyone else. Unsurprisingly, the school descends into chaos very quickly.

In the midst of all this, Cadel meets Kay-Lee McDougall, a kind-hearted and intelligent young lady. Through his correspondance with Kay-Lee, Cadel begins to realize that perhaps the world isn't as dark and cruel as he thought. For the first time in his life, Cadel begins to question the morals he's been raised with, and the true intentions of Phineas Darkkon and Thaddeus Roth.