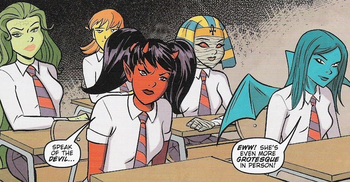 In some works, the Monster Mash settles down and raises a family. And where do they send their children of the night? Why, to a monster school of course! While there may not be anything special about the school itself, all of its students are certainly special. When the teens literally are monsters, and Wolf Man junior and Cute Monster Girl need to learn what it is to be a proper nightmare, this is where they go. There's often a Reluctant Monster or Friendly Neighborhood Vampire in the cast as the odd monster out, and sometimes it's the new monster on the block. Other times, it's a normal kid sent there by mistake. It may be all monsters and supernatural creatures, and sometimes it's an exclusive boarding school for one species (almost invariably vampires).
Advertisement:

It may also extend to witches, but only if the witches in question are a separate species like Hags. Any fantastical creatures, such as Bigfoot, Demons, Goblins, mermaids and fairies, as well as made-up monsters, may also be present, so it does not always follow the Monster Mash casting exactly. Preferably some form of Undead should be the main focus, it's mainly anything you'd imagine living in Halloweentown. Oftentimes the school lessons are on being scary, while other schools may focus on staying off of the Van Helsing hit list by maintaining the Masquerade. When it's in a world where monsters are commonplace, it's just a normal public school. If not, it's almost invariably a Boarding School, or a quite literal Boarding School of Horrors. Often an Academy of Adventure in this case. Conversely, it could be an Academy of Evil. A must if the setting is in Monster Town.

Requirements are that the school is actually for (or at least appropriated by night by) monsters, ghouls, ghosts or other supernatural/fantasy non-human creatures. The lone monster enrolled at a normal human school is a Fish out of Water and therefore does not count as an example, even if it is a magic school.

Usually this institute has a suitably spooky name. If it is a generic school with no name mentioned, as long as it's a work involving a specialized school for the sort of students previously mentioned, it counts.

Subtrope of Extranormal Institute. Related to Wizarding School, only it's for monsters. Not related to One-Gender School despite the similarity in name.

For the IDW graphic novel (which is an example of this trope), see here.