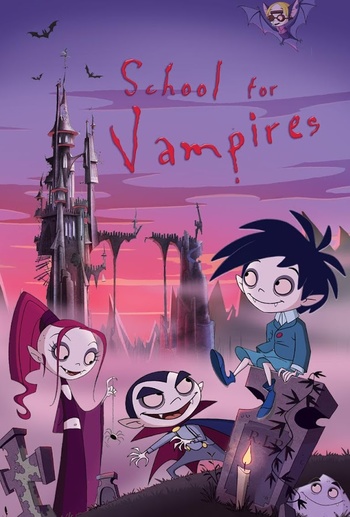 Clockwise from the top: Leechy (in bat form), Oskar, Ashley, Stoker, and Gothetta

"He is right dear, that boy could never pass as a creature of the night".

School for Vampires (Die Schule der Kleinen Vampire in German, Scuola di Vampiri in Italian) is a German/Italian horror-comedy children's animated television series, which, not surprisingly, centers around a group of vampire children learning everything that a vampire needs to know at the School for Vampires. Each episode is self-contained and follows the vampire kids' various misadventures without a strong emphasis on continuity. Our hero Oskar might have been one of the best students at the school if it were not for the fact he cannot stand the sight, let alone the taste, of blood; if he does, he faints. To make matters even worse, he is in love with a human girl named Sunshine whose grandfather is a vampire hunter!

Though the show originally ran from 2006-2010, it became available for streaming on Netflix in German, English, and French beginning on April 1st, 2016. The title of the show is sometimes translated as School for Little Vampires, which is how it appears on Netflix.