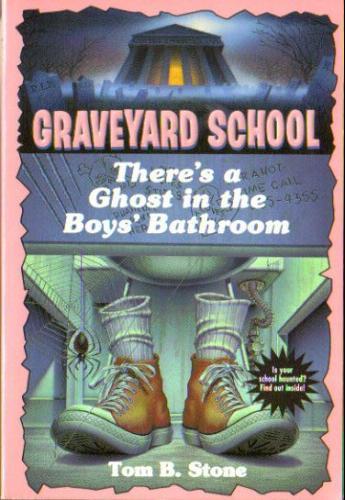 Graveyard School is a 28 book series of children's horror novels written by Nola Thacker under the pen name Tom B. Stone.

One of many kids' horror series published in the wake of the growing popularity of the Goosebumps books, the Graveyard School series actually subverted some of the more common elements found in Goosebumps.

The series takes place in the small town of Grove Hill, where sixth graders deal with daily horrors out of Grove Hill Elementary School, not-so-affectionately dubbed Graveyard School due to the abandoned graveyard located right behind the school. Only the kids seem aware of the nightmarish effects the graveyard and the school seems to have on the town, while their parents and older siblings are either blissfully unaware or in denial.

The school's staff includes the intimidating Dr. Morthouse, school principal and purported to have a silver fang in her mouth which the students can only catch glimpses of. There is also the overly saccharine Vice Principal Mr. Hannibal Lucre, the perpetually growling secretary Mr. Kinderbane, and the mysterious and elusive custodian Mr. Bartholomew, a.k.a. Basement Bart, alongside a rotating cast of teachers, some weird, some normal, and some evil.

Unlike the Goosebumps books, the series focuses on one main cast of characters starting from Don't Eat The Mystery Meat! and does include transfer students moving to Grove Hill as the school year progresses. Likewise, these characters fluctuate from main to supporting to background character from book to book, and there is no specific star of the series. A definitive trait shared by these kids is that, while they may have some annoying younger or older siblings and may deal with bullies from time to time, none of them reach the levels of Straw Loser and Butt-Monkey as the protagonists of the Goosebumps books do.

A definitive answer is never given to what the actual cause of the Graveyard School hauntings are, nor is there a given background on the school principal and whether she is the cause of the horror or a by-product of it.

Recaps of the books' storylines can be found there

; the books themselves can be borrowed at Internet Archive