"The British heroes of the Great Game have no such memorial, precarious or otherwise. There is little or nothing to show on the map for all their efforts and sacrifices. Today they live on only in unread memoirs, the occasional place name, and in the yellowing intelligence reports of that long-forgotten adventure."
— Peter Hopkirk 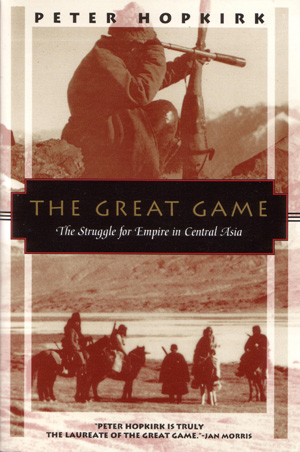 This is a classic history by Peter Hopkirk of the rivalry between Tsarist Russia and The British Empire for interests in Asia. It begins during The Napoleonic Wars when Britain had recently conquered a large part of India and was becoming nervous about its newly acquired possessions. In the meantime, the newly victorious Czarist regime was looking to extend its power conquering and settling lands to the eastward and probing at the Ottoman Empire. Central Asia was a gigantic blank space, a place of danger and mystery and sometimes of romantic tales.

Both Britain and Russia sent a series of explorer-spies into this vast territory to find out what was there. As well as intriguing with, or pressuring local princes. This became a generations-long Secret War which was to end in an anticlimax when both powers decided that there were more important matters elsewhere.

In retrospect, it seems like much ado about nothing at first glance. For Russia to invade India, it would have to get past the nastiest deserts in the world, then the nastiest mountains in the world. Then the British and Indian armies. In other words, Russia trying to conquer India would have been an even worse disaster than anyone else trying to conquer Russia. But there was no way to know that for sure at the time. In any case, much of our knowledge of the geography of the region comes from those days.

Other books in the series are Like Hidden Fire or alternatively On Secret Service East of Constantinople (about German intrigues in Central Asia in World War I) and Setting the East Ablaze (about the Russian Civil War in Central Asia) and Trespassers on the Roof of the World (about the Great Game as played in Tibet). Other books from Hopkirk, which deal with the area but not precisely about the Great Game are Foreign Devils on the Silk Road (about early archeological expeditions on The Silk Road) and The Quest for Kim (about tracing the possible inspirations for the classic Rudyard Kipling story Kim). All of these are now available in Amazon Kindle format.

For a fictional treatment of these events, see the Flashman series by George Macdonald Fraser.

Provides examples / considers the topics of: