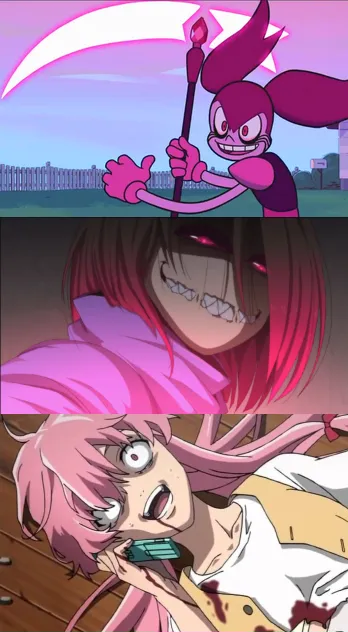 "Too much pink energy is dangerous!"Top to bottom Spinel, Bete Noire, Yuno Gasai
Sometimes, looks can be deceiving, especially when it comes to characters or objects wearing pink. For a color associated with femininity, innocence, playfulness, and love, they are often the ones that need to be watched out for. Female characters often at first appear to be quirky or crazy in a good way before exposing their... well.. true colors in the style of being a bitch or crazy in a bad way.
Advertisement:

Intense shades of pink such as hot pink and magenta can be associated with this, as they can be off-putting and too much for the eyes, and as such, characters who wear these shades, like the Alpha Bitch in teen films, can be a red flag, or a hot pink flag in this case. Muted shades of pink like puce or old rose can give off a macabre and visceral feel, and can also convey a psychologically not-all-there character.

In Japanese Media, the Yandere girls can be seen usually with pink clothes and/or hair. With pink being associated with love and romance, and being in Love Makes You Crazy if it's not Mad Love outright for these characters, you get a lot of psychotic pink-themed characters.

Male versions are more often crazy out of the gate or initially played off as adorable. Pink, being associated with femininity, is a deceptive/deliberate color for a female villain or a male Sissy Villain. Considering that men used to wear pink prior to the 20th century, and some tints and hues of pink are reddish, there would be an overlap regarding the violent and passionate nature of pink and how some men find the color manly despite its softened appearance.