WARNING! This character is a Walking Spoiler, as everything about her is shrouded in mystery until the last stretches of the game. Because of this, everything within the folders is Spoilers Off. Beware of unmarked spoilers ahead and please DO NOT add spoiler tags or edit the folders or which character the folders refer to without first inquiring with other tropers on the Discussion page! 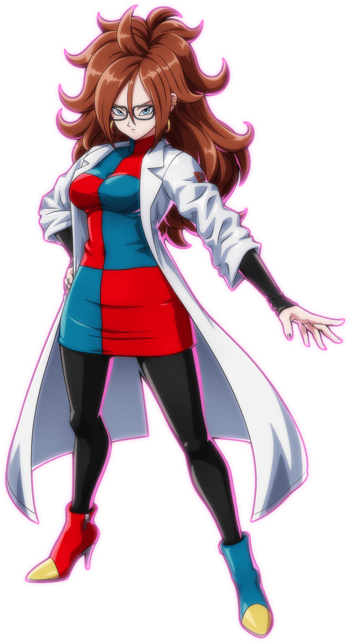 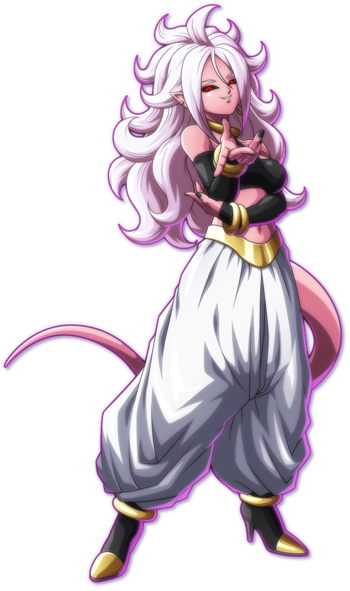 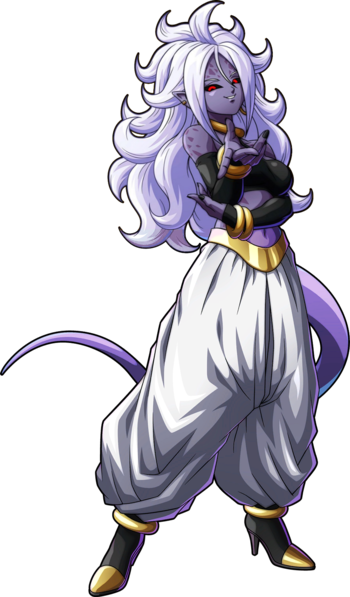 An android who serves as the main antagonist of Dragon Ball Fighterz. Made up from the cells of the greatest fighters in the universe, Android 21 is an incredibly powerful and deadly menace. She is programmed to have a need to feed on strong warriors, which adds to her own power. Her goal is to capture all the Z-Warriors, turn them into a giant feast of power for herself, then explore the universe to eat in an attempt to satisfy her endless hunger. She has at least some connection to Android 16 and Dr. Gero; 21 is said to be as smart as Dr. Gero, and later events reveal that her human appearance was based off of 16's mother. She may or may not have been Dr. Gero's wife; 21 herself doesn't seem to know (but at the same time, she doesn't care).

She appears as a young woman with long, bushy hair, glasses, a shirt with a mixture of red and blue, and a labcoat. In her true form, Android 21's skin turns pink, her hair turns into a much more pale palette of pink, her ears become pointed, her eyes change to red irises with black scalera, and she gains a tail. Her attire changes to a black tube top, keeping the black arm sleeves, and also gaining white baggy pants. She most resembles Majin Buu in this form, and much like Buu, 21 can turn people into various sweets before eating them.

As a playable character, Android 21 is unique for her ability to copy abilities from her opponents with her command grab. Outside of her power-copying techniques, she also boasts a strong long-ranged game, using a combination of copied attacks and her own projectiles to wear down her enemies from a distance.

Her human form (dubbed "Android 21 (Lab Coat)") was announced as a separate DLC characer in December 2021. Unlike her true form, Lab Coat 21 is a more well-rounded character that has tools for nearly every situation, in addition to command grabs that can increase her damage output or decrease her opponent's. 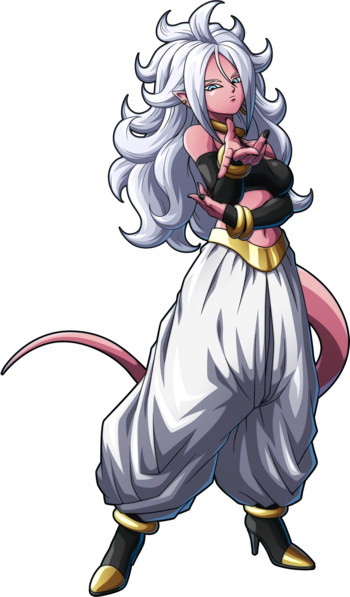 A purely good version of Android 21. She is revealed in the final arc to be the Android's "true" persona, and manages to retake control after expelling her Evil half.