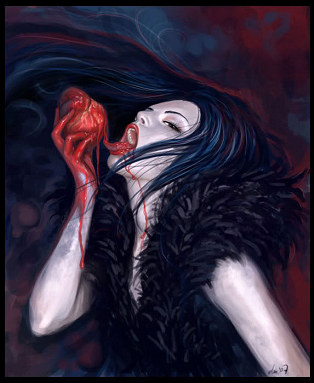 .
"Please don't leave me! I love you! I'm going to eat your every organ, and your bones...."
— Acktreal Domma, Alien Abduction Role Play
Advertisement:

Cannibalism is a strange beast. In most cultures eating another person is generally frowned upon. Most media tends to handle the subject one of two ways: either with horror or with dark humor. However there is a third way to use it: as a metaphor for sex.

At first such an idea might seem strange. After all, what do the two concepts have to do with each other? But upon further inspection they do have more in common than one might think. Both hunger and sexual desire are classified as "needs" and going without either for a long period of time can make the need for them feel all the more stronger. On top of that we have phrases like "sexual appetite" that combine hunger and lust into a single concept. People who lust after somebody are said to "hunger" for them. And in the actual act of lovemaking the man typically ends up "inside" the woman, just like he would if she ate him. Indeed, when a woman has a lot of sexual partners she is called a "maneater," implying that she not only sleeps with these men then ditches them, but devours them like hors d'oeuvres.

As a result media sometimes adds sexual undertones/overtones to the concept of eating another person. Often times this manifests as innuendo eating that is pretty much an euphemism for sex. It also shows up as a metaphor for sexual power and dominance in characters like the Literal Maneater, who both titillates and devours her victims. A third way this trope can be used is the predator catching her (as it's often a her) prey in a manner that is reminiscent of a seduction.