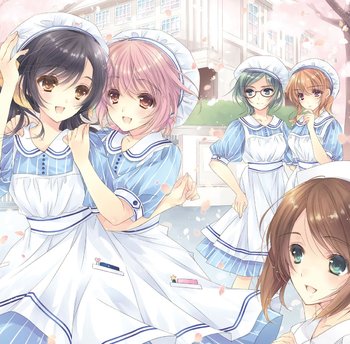 "I reach for the stars..."
"I solemnly pledge myself before God and in the presence of this assembly to pass my life in purity and to practise my profession faithfully. I shall abstain from whatever is deleterious and mischievous, and shall not take or knowingly administer any harmful drug. I shall do all in my power to maintain and elevate the standard of my profession and will hold in confidence all personal matters committed to my keeping and all family affairs coming to my knowledge in the practice of my calling. I shall be loyal to my work and devoted towards the welfare of those committed to my care"
— The Nightingale Pledge
Advertisement:

Nurse Love Addiction is a Yuri Genre Visual Novel published by Degica Games and released for the PlayStation Vita in April 2015 in Japan. On December 25, 2015, it was released on PC in Japan, and on July 8, 2016, it was released worldwide through Steam and again on December 26, 2019 for Nintendo Switch. A physical release is expected in 2020 from Limited Run Games, bundled with its prequel title, Nurse Love Syndrome. The story centers around a young nursing student, and her adventures in love, and medicine.

Osachi Asuka is a jellyfish girl. All through high school she floated from one day to the next, never working hard or becoming very invested in any particular thing. She expected this carefree life to last forever, when all of a sudden in her final year she was given a career goal worksheet by her teacher, and she realised that all of her friends were now taking their futures seriously! Panicked and uneasy, she turned her room upside down trying to think of something she could aim for as well, when she discovered a book she had enjoyed as a child. While she has no memory of it, on the final page she sees the words: 'I'm gonna become a nurse!!'

And so the jellyfish girl enters nursing school, accompanied by her diligent and earnest younger sister Nao (in the same year as her due to the fact that they were born just one day less than a year apart). There she will meet: Sakuya, the cold but incredibly elegant and mature Ojou; her girlfriend Itsuki, as mysterious as she is stylish and intelligent; and Kaede, Asuka's teacher, who embodies all the kind and pure presence of a perfect nurse.

Over the course of her study, Asuka will learn and grow and discover why she does in fact want to be a nurse - and perhaps find love along the way, too. A journey of sweet romance, and fluttering lilies await her...right?