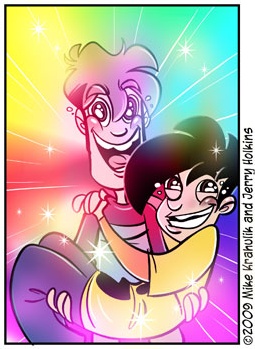 A squee is the sound made by excited fangirls (or fanboys). The exact nature of what makes someone squee depends on the type of fan. Shippers squee when something comes up with their OTP. Comic fans when they get a new comic or model. Video Game fans squee at the announcement of a game in their favourite series. It can even be caused by meeting a favourite actor, actress, or other celebrity.

It is an excited expression of desire for the object that caused the squee, though not necessarily sexual desire. Can be triggered by Cuteness Proximity or And the Fandom Rejoiced.

In writing, it is often followed immediately by the emote *dies*, to imply that the user in question has suddenly fainted from euphoric overload. In Japanese, "Squee!" often translates to "Kyaa!"

Most likely a mutation of or derivation from "squeal". Possibly a Portmanteau of "squeal" and "glee". Any resemblance to Squick is (mostly) purely coincidental, but it is worth mentioning here that one person's Squee can be another person's Squick.

For the comic book, see Squee. Or, if it's the other guy named Squee, see Magic: The Gathering. For the rodent, see Myst III: Exile. And if you want the game company, add a "nix" to make Squeenix.

Compare The Knights Who Say "Squee!". A common result of a Shirtless Scene, Girl-on-Girl Is Hot or even Guy-on-Guy Is Hot.

Note: This page is for In-Universe examples only. Real Life squeeing goes to Gushing About Shows You Like only.