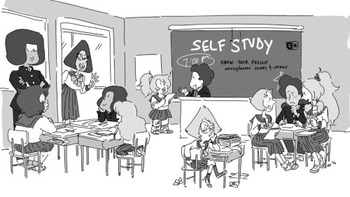 Steven and Amethyst have their heads together, whispering excitedly to each other. Pearl doesn't exactly like the look of it. She thinks it's suspicious and asks Garnet if they should ask what the pair is up to. Garnet declines.

Pearl asks, liltingly, if there's something Steven and Amethyst want to show them. Steven and Amethyst excitedly remind them that there was recently a big showdown with Jasper. They point out that Garnet and Pearl already know that, but they ask if the two bigger Gems know who beat Jasper.

Steven and Amethyst tell Garnet and Pearl they have someone they'd like the Crystal Gems to meet. Garnet and Pearl settle on the sofa. Pearl asks who they would like to introduce, calling them a "mysterious stranger" and coming off like she's humoring them. Steven and Amethyst turn to each other, all determined smiles, clasp hands, and in a flash of light: SMOKY QUARTZ is back! That's all it took to bring the fusion back — a clasping of hands. They didn't need to dance; like Sapphire and Ruby don't need to dance. They're that simpatico.

Garnet's reaction is unbridled joy as she recognizes all this in an instant. Pearl's reaction is more stunned shock with a little disquiet. Pearl's rather muted response does nothing to diminish Garnet's overjoyed enthusiasm; she Squees for nearly twenty seconds straight as Pearl fires a barrage of questions at the young fusion.

Excited about showing off, Smoky begins to demonstrate their weapon, promising they'll knock Pearl's socks off. They produce Amethyst's whip, Steven's shield, and combine it into the Killer Yo-Yo. They begin naming their tricks, which includes "Walk the dog", "Jump the dog", and "Dog walking's just my day job until I get my call back". Pearl adjusts her sock, watching with increasing discomfort as Smoky's enthusiasm with the demonstration doesn't take into account that Steven's house is pretty fragile. As the Yo-Yo knocks things over and destroys Steven's television, Pearl turns to Garnet.

The Crystal Gems are gone, as Garnet and Pearl have fused into Sardonyx. Sardonyx is gushingly delighted to meet the new fusion and learn everything about them, but not in the house. She turns to the temple and introduces them to Sardonyx's room — which exists metaphysically in the temple as long as Sardonyx herself exists. The door to the temple becomes curtains, and the huge fusion squeezes herself through the door before inviting Smoky after.

On entering, Smoky finds themselves on the set of "Sardonyx Tonight". The room is set up like a TV Talk show with Sardonyx as the host and the new fusion as the special guest. The two fusions trade quips for a little bit before Sardonyx decides to urge Smoky to show off more than just the yo-yo. Smoky reminds Sardonyx that between the fight with Jasper and this introduction, they're maybe only ten minutes old. But eager to please, they go along with Sardonyx as she conjures tasks for them.

First she tries to get Smoky to fire at a target with Opal's bow and arrows. Then she tries to get Smoky to show off Super Strength with one of those carnival mallet machines. The first try barely passes Pearl, the lowest mark on the chart. The second try is barely any better as Smoky obviously feels pressured to perform and unprepared to do so. Sardonyx's having set the mallet machine to mock anything less than a bell ringer only makes things worse.

Trying to use Alexandrite's devastating fire breath fails as well, and Smoky's jokes go from playful to self-deprecating, to obvious self-loathing as the fusion has latched onto Steven and Amethyst's feelings of not being good enough.

As Smoky's good humor diminishes, Sardonyx eventually comes to realize that her well intended show for Smoky has backfired completely because Sardonyx put all the attention on herself, and all the pressure on Smoky! Clearly feeling bad about having made Smoky feel bad, Sardonyx reacts guiltily to her own realization.

Sardonyx: They want to impress us! They were planning this all morning! We hijacked their show! I ... I got excited. It's not...about...us!

With that, the show is over. Sardonyx de-fuses back into Pearl and Garnet. Unfortunately, that means that since Sardonyx is gone, her room begins ceasing to exist — with everyone still in it! Smoky acts without thinking, whipping out their Yo-Yo and swinging to grab Garnet and Pearl, flinging them all out of the room! A second later, the curtains are gone and the temple door is back to its usual appearance, indicating they got out in the nick of time.

Steven: Owww...sorry for the rough landing.

Garnet and Pearl thank Steven and Amethyst, who have also de-fused after the rescue, for saving them, and clarify that they love and welcome the new fusion.