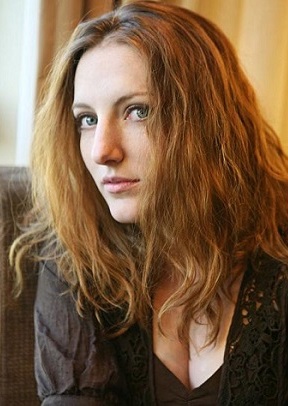 Caitlin Tiffany Glass (born November 16, 1981 in Washington, D.C.) is an American voice actor and ADR director. While studying at University of Texas at Arlington, Glass was hired by Funimation while on a tour of the studio. Her first roles were bit parts on Case Closed until she landed the role of Hiyono in Spiral. She then went on to voice Triela in Gunslinger Girl and Gunslinger Girl: Il Teatrino, and Takane in Burst Angel.

In 2006, Glass began her first major directing project, Suzuka. Glass is one of a select few directors working on Funimation's dub of One Piece. In 2008, she completed Ouran High School Host Club as well as playing the lead role of Haruhi in the show (and once again pairing up with Vic Mignogna — cue mass Squee). Along with directing, Caitlin enjoys adapting theme songs for FUNimation dubs, and can occasionally be heard singing them.

She married in 2009, much to the delight of her fans, and proceeded to take a break from FUNimation cavorting about Europe with him for a year and a half. They came back to Texas in September 2011 where she voiced the role of Hannah Annafellows in the second season of Black Butler.

She occasionally works in Los Angeles, particularly with New Generation Pictures for the Street Fighter series as Cammy White, and at Bang Zoom! Entertainment in works like Sword Art Online, Yuki Yuna is a Hero (as a script writer), and Love Live! as Maki Nishikino, as well with Central Command Studios for Skip Beat! as Kyoko Mogami.

Her sister, Rachel Glass, is also a voice actor.

Caitlin Glass and her works provide examples of: