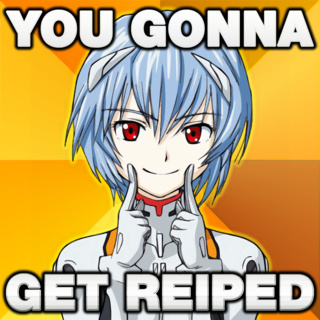 And you're going to like it.
"Welcome to NERV. God's in His heaven because He's scared of our superior firepower."
— Yui Ikari
Advertisement:

If Shinji And Warhammer 40 K can be called the love child of Neon Genesis Evangelion, Warhammer 40,000 and Tengen Toppa Gurren Lagann, then NGE: Nobody Dies

is what happens when you mix Eva with Overman King Gainer, a smidgen of Nextwave, and a not-inconsiderable number of Shout Outs. It could also be what happens when Rei is raised by the Warner siblings and Lelouch Lamperouge and then gets set loose in the Geofront.

Nobody Dies is the brainchild of Gregg Landsman, author of Walking in the Shadow of Dreams. The title's a little misleading

, so here's the story in a nutshell — it's Evangelion, except that Yui didn't completely go through with the contact experiment with Unit 01. As a result, both she and Kyoko Zeppelin Sohryu are very much alive, and their influence on the story has turned virtually the entire series on its head, in some ways that are predictable (Shinji is more well-adjusted, though not so different from his canon counterpart as to be totally unrecognizable) and some ways that really, really aren't (Rei and Asuka, on the other hand...).

At its heart, the story is a Fix Fic and a transformation of Evangelion into a classic Super Robot show, with plenty of humor and action and giant robots beating the stuffing out of equally giant monsters. That's not to say everything is all sunshine and roses, however; not all the changes invoked are for the better, and the series has its share of dark moments. By and large, however, Nobody Dies is very much of the Lighter and Softer variety of Evangelion fanfiction, and it comes highly recommended to anyone looking for exactly that.

As of February 22nd, 2012, Nobody Dies has hit 110/79 chapters, starting what would have been its fifth "season." Sections of each chapter were posted in the SpaceBattles.com forum thread about the fic

before the entire chapter got posted to fanfiction.net, if you want teasers. It should be noted that this is actually the thirteenth discussion thread for this fic; here are the links to the original thread

threads. It should also be noted that the original had become the largest discussion thread on the entire site, way past the point where threads are normally locked, and the second was one of a number of large threads that temporarily crashed Spacebattles' servers. The 3rd and every thread since, on the other hand, were locked before this could happen, and they got auto-locked when they reached a length of 500 posts.

Due to this series' popularity, several spinoffs exist, often side-stories focusing on some of the many, many side characters. Canonised ones (in more or less chronological order) include:

In addition, several future/alternate timelines have generated their own fics:

Additionally, Gregg began an open beta test of a rewrite of the fanfic, The Rebuild of Nobody Dies. The first thread is found here

, and the second thread is here

. The first twelve chapters have been posted to fanfiction.net.

Please post single character-specific tropes to the character sheet. Other important links are at the top of the page.

Severe reader backlash from a certain Wham Episode led to a massive Creator Breakdown, and it seems that the original version of Nobody Dies is, well, dead. Gregg had insinuated that it's in a state best described as "hibernating", implying updates were possible. However, since then it has come out that the reference document has been deleted entirely, meaning the story is unlikely to ever be continued.