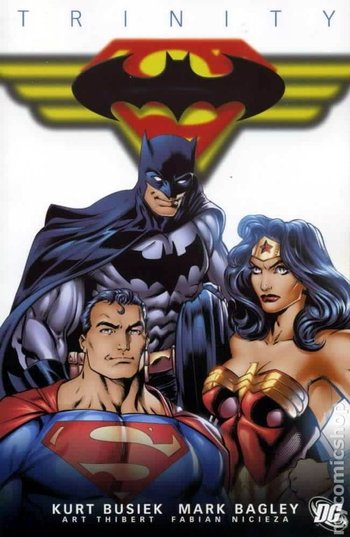 By Kurt Busiek and Mark Bagley
But let's talk about the dreams. Dreams of power, just waiting to be plucked... Power that would shake the firmaments, which admittedly doesn't sound as ominous in the plural as I'd hoped... but still, power enough to reorder the very nature of reality.
— Enigma
Advertisement:

Trinity (2008) was a 2008 maxi-series written by Kurt Busiek and Fabian Nicieza and illustrated by Mark Bagley, focused on the “Trinity” of The DCU: Superman, Batman and Wonder Woman (although every major hero appears at some point). It is unrelated to 2016 comic-book “Trinity”, although both series revolve around the bonds between the Big Three.

Morgan Le Fay, Enigma (the antimatter universe Riddler) and Despero realize the Earth's three greatest heroes are a “trinity”, keystones to immense cosmic power, and the symbols of Tarot can be utilized to steal that power and change the universe itself.

With this goal in mind, they and their pawns engage the world’s heroes over and over again until they manage to brand Superman, Batman and Wonder Woman with Tarot symbols. The three heroes are subsequently erased from history as the villains take their places.

With the Trinity no longer present in the universe, history rewrites itself. The new world is a darker and edgier place, and the reality itself is severely unstable.

Only six individuals with close ties to the missing heroes (Lois Lane, Kara Zor-El, Alfred Pennyworth, Dick Grayson, Donna Troy and Thomas Tresser) keep vague recollections of how the universe was meant to be, and come together to find the Trinity and bring them back before their own dimension falls apart.

Batman: Here, we face our problems. And we find a way to overcome them. That's what's needed here. Not being so perfect that there aren't any problems in the first place.