Fanfic / A Crown of Stars 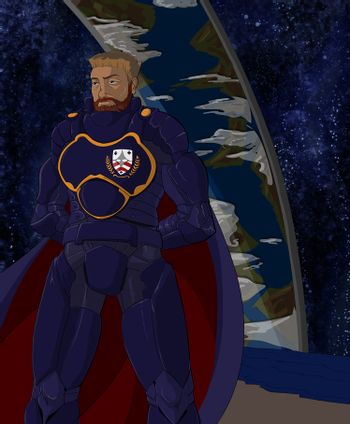 "Pilot Ikari Shinji-san? Fräulein Pilot Asuka Langley Sohryu? I’m sorry to interrupt your rest, but this is the earliest I could arrive."
Don’t…that’s something else they told us. You don’t have to be afraid anymore. Of anything. And ‘you’re allowed to be happy now.’ Don’t miss this chance.
Shinji… […] this… isn’t going to be easy. I know… I can be hard to live with. And you… we’ve both got… a lot of problems
Asuka, both of our parents practically dumped us by the side of the road before we were four. Both of us have actually died in combat with alien monsters before we were fifteen. We outlived the end of the world, and then some. Why should anything in our lives be easy, even the good things?
Advertisement:

After Third Impact, Shinji and Asuka's lives got increasingly worse. For five years they were puppets of the warring warlords and military dictators fighting over the control of the post-apocalyptic world. They were kept alive only because they were the only living persons able to pilot an Evangelion, and they were forced to remain apart for three years. Although they met again, they were so physically and psychologically worn-down and emotionally wrecked than they were unable to open up. Still they stuck together because they felt that nobody else in the world could understand their pain.

And then, right when they are being sent off into another war, after which they will be rendered obsolete and possibly executed at a dictator’s whim, a stranger comes along and makes them an offer of the "It sounds too good to be true" kind… and he brings along their future selves to convince them that they can trust him.

A Crown Of Stars is a Neon Genesis Evangelion Fix Fic by Strypgia, and authorized sequel of the Dark Fic A Throne Of Bayonets

It can be found in the Sufficient Velocity forums

. As of March 25, 2021, the fanfic has concluded, though the author is thinking about revisiting the setting of Avalon at some point.

Do not confuse it with Crown of Stars.

Now has a Character page in desperate need of some wiki magic.

A Crown Of Stars provides examples of the next tropes: