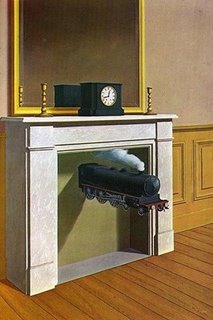 Clearly, your train is leaving at approximately 12:44.note Time Transfixed by Rene Magritte
Everything you know is wrong
Black is white, up is down, and short is long
And everything you thought was just so important doesn't matter
— "Weird Al" Yankovic, "Everything You Know Is Wrong"
Advertisement:

The Mind Screw is something that relies so heavily on symbolism or surrealism/absurdism, or failed so extremely in an attempt at regular old coherency, that the immediate response afterwards is "What the heck was that?!?!"

These works beg for fans to invent their own improbable theories about Epileptic Trees and such.

There are several criteria for a Mind Screw, and a Mind Screw will usually fit a few of them:

While some fans can make arguments over what the symbolism means, and what everything represents, many mind screws will pad themselves with meaningless sequences to make the audience work even harder. Arguments over which sequences are significant are common. Don't expect the writer to be very helpful. And if the show has supplemental materials, don't expect them to be much help either. (If, by some miracle, they are helpful, you've got yourself a Mind Screwdriver.) The more decipherable symbolism tends to focus on the perceptions people have of one another and puberty and sex. Japanese and South Korean often produce this sort of thing and particularly in the horror and psychological drama genres because Asian audiences thrive on this type of oblique, enigmatic ambiguity. David Lynch is hugely popular in Japan for this reason.

Note that the screwing is not the kind that involves romantic candlelight, long walks on the beach and the throes of passion. Unless you're into that.

Not to be confused with Mind Rape, no matter how the audience feels, nor with the Mind Game Ship, nor Mental Affair, which is a literal mind screw, nor with the literal screws in the mind of Frankenstein's monster.

Distinct from an In-Joke, which is designed to make sense to a portion of the audience.

When trying to get the creators to explain just what the heck is going on, expect some form of Shrug of God or worse.

Examples listed are works that are either intended to provoke this reaction or have provoked this reaction in a large spectrum of the audience, but one troper's Mind Screw is another troper's Fridge Brilliance.

Sub Tropes include Gainax Ending, Dada Ad, Alien Geometries. The Ending Changes Everything is an ending that does not rely on overt symbolism for its confusing nature, but has much the same effect on viewers. When this is funny, it's Surreal Humor. When frightening, it's Surreal Horror.

Compare with True Art Is Incomprehensible, Deranged Animation and What Do You Mean, It Wasn't Made on Drugs?.

Contrast with Mind Screwdriver, where the Mind Screw elements get rationalized/explained.

Nigel, the main antagonist of the movie Rio, has a example of this with his Villain Song, "Pretty Bird", where he explains his backstory as a show bird and how he's now a murderous Card-Carrying Villain, and it's very trippy.

Alternative Title(s): Mind Fuck, What Is This I Dont Even, Other

Nigel, the main antagonist of the movie Rio, has a example of this with his Villain Song, "Pretty Bird", where he explains his backstory as a show bird and how he's now a murderous Card-Carrying Villain, and it's very trippy.