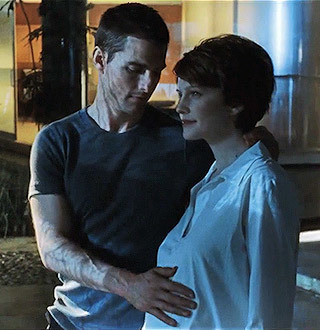 "Did it just high-five me?"
Advertisement:

If you want to indicate to your audience that a woman has just found out she's pregnant, thinks she might be, or just happens to be thinking about it, there's one tried and tested visual shorthand — she rests her hand lovingly on her lower abdomen. Exactly where depends on her knowledge of biology, but it should be pretty clear she's aiming for her womb.

It doesn't have to be the mother who does it; perhaps Bob comes in, kisses Alice on the cheek and lovingly strokes her belly. Or maybe Paolo struts into the room, gives Alice an evil grin, clutches her stomach and sneers "Does Bob know yet?" Either way, we're receiving the message loud and clear.

May lead to someone being Mistaken for Pregnant when really, she just had an intestinal bug.

Note that to be this trope, it has to be the first time the audience knows about the pregnancy — if we already know she's pregnant, all she's doing is cradling her unborn child or Feeling the Baby Kick. And if she's heavily pregnant, it might just be the most convenient place to rest her hands.