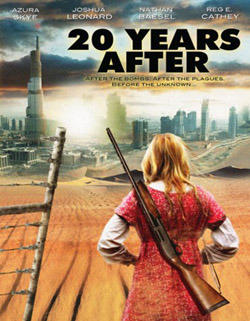 It's a long journey ahead.
Advertisement:

20 Years After is a post-apocalyptic film about a pregnant woman named Sara struggling to survive to give birth to the first baby in 15 years. 20 years earlier a nuclear war and a plague wiped out most of humanity. Sara and her mom now running out of supplies try and reach some survivors to get more.

Not to be confused with the sequel to The Three Musketeers.

20 Years After provides examples of the following tropes: